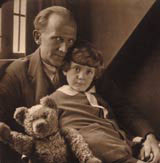 Surveying the ebb and flow of visitors around the BP Portrait Award exhibition, Jude Simmons agrees she has a good job. As head of design at the National Portrait Gallery she has as much contact with national art treasures, artists, designers and photographers as most people have with the office water cooler.

Take Mario Testino. The photographer’s show of beautiful people, which closed last month, gave Simmons the opportunity to work with not only Testino himself, but also his designer Patrick Kinmouth – a theatre and opera specialist who Simmons admires – who he shipped in specially. Did that put Simmons’ nose out of joint?

‘No, it was a privilege to work with them. They were very charming and hands-on,’ she says with genuine enthusiasm. ‘[Testino] has certain preferences, such as using [the typeface] Visionaire on material and printing his name in Helvetica bold on posters and catalogues,’ she laughs.

Her job was to make the exhibition work in the space provided, which is the NPG’s only exhibition gallery, and she learned a few theatrical tricks from Kinmouth.

‘He created a false perspective to make the gallery seem bigger. One of Gwyneth Paltrow’s photographs, featuring her in front of a window, was placed opposite the entrance at the back to create the effect,’ she says. Indeed, you would barely recognise the space as the same one currently housing the BP Award, where portraits are hung around the edges.

External consultancies are often bought in for exhibitions, particularly when Simmons needs input in a certain area where she lacks in-depth knowledge. She collaborated with At Large on the forthcoming Americans show; worked with Din Associates’ Angela Drinkall on Painted Ladies, which ran from October 2001 to January, and works regularly with Calum Storrie, who designed the current George Romney exhibition. She even set up a marketing and publications design roster last summer, which includes NB Studio, Pentagram and Price Watkins and two she has yet to work with: Smith and Agenda.

But Simmons does a lot of graphic design work herself. She created graphics for the Romney exhibition, working closely with the gallery’s access officer to ensure the correct type size was used, and worked on the exhibition Beatrix Potter to Harry Potter, downstairs in the main ground floor space, of which she is clearly proud.

She branded each author’s space – from Enid Blyton to Roald Dahl – in a different shade of blue, and worked with Price Watkins, which designed marketing material and the accompanying book, to ensure the colour scheme translated well. And she employed freelance prop designer Sofie Layton to create a ‘story tree’ with built-in seats, which came with both budgetary and space constraints.

As with Kinmouth, she enjoyed working with Price Watkins, but acknowledges you have to be flexible working with outside design consultancies. ‘You must be able to compromise,’ she says. ‘For example, I had to back down on the typeface we eventually used.’

Simmons trained in graphic design at the London College of Printing. In 1983 she joined retail design specialist Allied International Designers, now Addison, where she worked with, among others, Rasshied Din. After five years, she joined the British Museum on a three-month temporary contract, and stayed 12 years as a senior designer.

She waxes lyrical over legendary former head of design, Margaret Hall, who still has yet to be replaced at the beleaguered museum. ‘[Hall] ran her 30-strong design team like a design academy,’ Simmons remembers. ‘As well as technical staff such as carpenters, we had three teams of six designers; two 3D designers, two 2D designers and two assistants. It was a great way to work.’

Here she worked on a mixture of small and large projects, including one year dedicated to the Oriental galleries alone. When Hall retired a few years ago, Simmons considered going freelance before applying for the NPG role two years ago.

The range of her job still amazes her, but keeps her sane, she says. As head of design, she influences gallery policy to a degree, but is equally at home briefing Pentagram as she is rustling up an ‘out of order’ sign for the loos. ‘I enjoy the variety and the hands-on aspect of the job,’ she says, without a trace of irony.

Exhibitions are decided years ahead, she says, so I ask if the gallery plans to ‘do another Testino’. ‘We’re not the Tate Modern and portraiture is a limited field in terms of staging blockbusters, and our visitors enjoy small-scale shows,’ she says. But the Testino show benefited everyone, and visitor numbers soared, so one every few years would be a good idea, she says.

Meanwhile, the gallery’s refurbishment programme is almost complete, and has so far transformed dark, dusty galleries into huge public spaces flooded with light. The Regency Galleries are the last to be done, led by Piers Gough at CZWG Architects and designer Howard Sullivan.

One of the most satisfying aspects of her role is being able to garner reaction to her work, Simmons says. She replies to all design-related written comments personally and, as she walks around the galleries incognito, she can see close-up what visitors think of her work. Not many designers can do that.

1983 Graduated from London College of Printing in graphic design

Local groups should be favoured over London ones