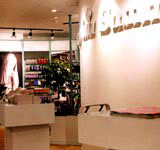 Adult brand Ann Summers has appointed interiors consultancy Silver & Co and graphics group MHG for a far-reaching redesign of its core brand, which will launch in October.

The rebrand incorporates new interiors, products, logo, graphics, packaging and a website. A consultancy has yet to be appointed for on-line aspects of the project.

The redesign follows research into the brand undertaken by BDG McColl. “The results revealed what works and what doesn’t,” says Ann Summers head of brand marketing Rebecca Franklin.

“The core brand, particularly in photography, graphics and store interiors, is all looking a touch dated. But we must be careful not to alienate existing customers who like the current offering,” she adds.

Three or four rebranded pilot stores are scheduled to open in October. One will be in Scotland and the others will be in England.

The success of the stores will be examined after a six-month period incorporating Christmas and Valentine’s Day, which are key buying points.

A further 20 Ann Summers stores are planned nationwide over the next few years.

A roll-out of the Soho brand has not yet been confirmed and “depends on finding the right sites”, says Franklin.