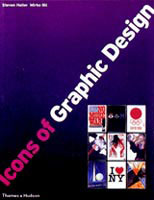 After getting a public slating from Milton Glaser following my firm but fair review of his book, the arrival of Steven Heller’s new tome from the same publisher has made me approach with caution.

Mind you, this one can’t be pinned entirely on Thames & Hudson – it has co-publishing written all over it – given that it’s available in the US through North Light Books under the title Genius Moves, 100 icons of graphic design.

Hmmm, genius moves? Could sound like a crib-sheet for chat up lines really, so it’s no surprise they’ve re-titled it for a UK audience. By elevating the book from pick-up line lexicon to god-like status with the title Icons of Graphic Design, the publishers are clearly dabbling at a little bit of re-positioning.

A gentle noodle through 100 pieces of graphics surrounded by historical references, well that’s one thing, but a definitive survey of the ultimate, irrefutable, iconic pieces of graphic design in the 20th century? Well, that’s another matter entirely. There’s no doubt that we could do with it, drowning as we are in a sea of self-penned vanity publishing and case bound corporate brochures, which accounts for most of the current books on design.

But I’m sure that’s not the book Heller set out to write. As far as I can tell, “Iconic moves”, if I can call it that, is meant to be a slightly haphazard but well-meaning collection of work from which we can study the development of style and ideas over the course of the last century.

By forcing themselves to pick 100 chronological main images and then refer to work that came before or after, Heller and his researcher Mirko Ilic have created a simple structure which lends itself best to ambling through and simply picking up points of interest.

It comes a bit unstuck with some categories – while Alphabet as Metaphor introduces a famous piece of Alan Fletcher and then refers it backwards and forwards to pieces from the 1950s to the 1990s, Show of Hands basically groups a bunch of posters together with hands in them. And Round and Round showcases a series of layouts that go, er, round and round.

My first reaction to this book was one of doubt that anyone could successfully nail the 100 icons of graphic design in 200 pages. But then I realised that wasn’t really the point and tried to re-assess it as the target market will – a useful collection of some famous stuff all in one book – and when I viewed it from that angle it felt a lot better.

In his introduction Heller intimates that “the key to graphic design is knowing what to apply and how to revivify what is familiar”. Indeed, the discovery that “Uncle Sam wants you” (the famous World War I American recruitment poster) was borrowed from three other countries’ versions is a nice bit of cultural archaeology. But it still worries me that the overriding impression you are left with is that graphic design is easy really, you just find something historical that you like, do something that is kind of similar and hope that no one will notice.

Forgive me, but I thought there was more to graphic design than that?

Icons of Graphic Design, by Steven Heller and Mirko Ilic is published on 24 May by Thames and Hudson, priced £24.95