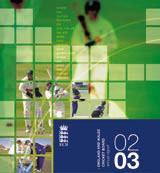 Northampton-based Milton Bayer has gone into bat with the England & Wales Cricket Board’s annual report, as the sport’s governing body aims to show its support for the game’s grassroots.

Perceptions of the ECB are often limited to its management of the England test team, but the organisation is also responsible for cricket from schools to international levels.

‘The new annual report goes a long way to communicate creatively our vision for cricket in this country,’ says ECB director of corporate affairs John Read. ‘We have a clear commitment to become, and remain, the most respected cricket nation in the world and this document encapsulates [our] strategy.’

Milton Bayer joint managing director Don Mammatt says the report allows readers to ‘understand at a glance’ the ECB’s ‘seven steps’ of cricket from the playground to the test arena.

The report will be distributed to politicians, journalists and opinion formers, as well as to cricket clubs and potential sponsors.