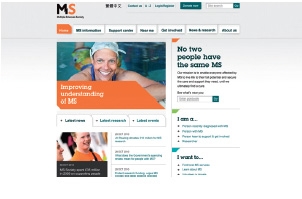 Precedent has overhauled the MS Society’s website in a project that aims to increase the site’s authority while also using accessible design.

The consultancy was appointed following a creative pitch in September 2010.

A brief was set to convey the strength and the authority of the organisation and show it to be knowledgeable and approachable, according to the consultancy.
Precedent has also looked to address user requirements of people with the condition through an accessible design.

A variety of motor disabilities result from MS, including eyesight problems. Precedent has addressed this with oversized icons to click on, larger fonts and simple page layouts to avoid ’visual clutter’, the consultancy says.

Wider than normal ’gutters’ have been included to help users delineate between sections and thus avoid the wrong option being clicked by those with impaired mouse skills.

The look has been partly governed by a Spencer du Bois-designed visual identity, which has been in place since 2006. Precedent met the consultancy to develop online guidelines.

A principal palette of orange, black and white has been used, ’but we’ve made more use of bright and fresh secondary colours, especially green’, says Curless.
The new site launches on 27 May to mark the end of MS Week 2011.

It follows a Precedent-designed Map MS microsite, designed for the charity to be used during MS Week as a tool to engage its social media and forum communities through a geo-mapping feature led by video content.