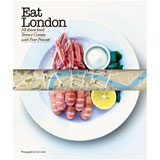 Cookbook design has moved on since Mrs Beeton, and a sprinkling of new publications is adding spice to the genre, says Sarah Balmond

You only have to take a look at some of the rather cheerless-looking cookbooks discarded in charity shops to appreciate how far this publishing genre has come.

The cookbook is as much a style statement as the limited edition Jasper Morrison saucepan that you use to cook with. Po-faced photography of impossibly immaculate food, juxtaposed with an unmitigated list of ingredients, is now a thing of the past. These days, the cookbook is more commonly a hybrid publication: part travel guide, part science book, part food fact-finder and part restaurant review, all rolled into one.

Jonathan Christie, art director at Conran Octopus, the publishing company founded by Terence Conran and Paul Hamlyn in 1984, is currently designing two lifestyle-led food books, featuring travelogues, reviews and recipes by personality authors. The first, due to be released in March, is called Eat London: All About Food, and is co-authored by Peter Prescott and the great man himself, Terence Conran.

It is a guide to the best restaurants, cafés and delis in London, and includes about 70 recipes. The book design features a jacket that unfolds into a portable map, enabling readers to locate their favourite eatery, as featured in the book. The book uses a reportage style of photography by Lisa Linder to recreate the bustling food street culture of London.

‘We wanted this book to be quite different and didn’t want it to look like a traditional cookbook or guidebook. A major challenge was how best to communicate all the information and cross reference it in the book,’ says Christie. 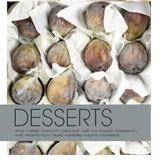 Conran Octopus is also publishing Eat My Blog, a working title for foodie Pim Techamuanvivit’s first cookbook, due to be published in June. The book is based on her popular blog, Chez Pim, which sees the food-obsessed San Franciscan travel the world, posting recipes and recounting food stories on her website. The book is designed by Christie and aims to translate the immediacy and informal tone of her blog. ‘We are trying to strike a balance in the book. There are lots of layers and a sub-strata of different materials to include. We want to get a sense of her travelling around and get across her discursive, diary-type tone, as featured on the blog,’ he says.

Ease of use was a key consideration in the book’s design and each recipe is graded according to a barometer: easy, medium and challenging. Single images of key ingredients are pictured on page as idents to help with navigation and a silver colour palette is integrated throughout the design to give the cookbook a luxury feel, according to JP Creative creative director Jeannette Pritchard.

The book’s design harks back to a more classic ‘Mrs Beeton’ era of design, and aims to buck the current trend of ‘aspirational, lifestyle’ cookbooks, she says. ‘That type of cookbook can seem a bit false and, for Tom, we wanted a stylish, clean, simple design with no fluff. We wanted to make the Michelin star aspect accessible,’ she says. Pritchard believes cookbooks will continue to evolve. She predicts that the fish, meat, vegetable and pudding cookbook categories will be replaced with more seasonal cookbooks, which focus on food that can be cooked in spring, summer, autumn and winter.

Jamie Oliver, who helped spearhead the lifestyle-led cookbook revolution, is launching Jamie at Home next year, with a design by Penguin art director John Hamilton. It will be based on recipes that see Oliver use ingredients from his garden.

The design is still being worked up, but will probably feature fewer photographs of Oliver and more graphics to tie in with the supporting TV series, according to Hamilton. The Plant is designing illustrations and Hamilton may work with other designers in due course, he says.

Hamilton, who has designed all of Oliver’s cookbooks, is also planning to relaunch Oliver’s backlist of cookbooks with a revamped front cover. This will move away from the ‘Jamie’ mug-shot design and feature more illustrations. ‘Jamie’s personality plays a massive part in the design of his cookbooks. We don’t want something too chef-like or clever because we don’t want to alienate people. We have to be original and are always looking at ways to reinvent. There is a real glut of cookbooks out there, with too many copyists,’ says Hamilton.

As competition increases, the onus is on designers to create original and unformulaic cookbooks. Edgy publications that push the boundaries of cookbook design are today’s ‘plats du jour’. 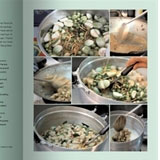 The evolution of Cookbook design:

• A move away from highly stylised photography, featuring food-on-plate images, towards more natural compositions focusing on the ingredients in a raw state

• Seasonal cookbooks are replacing traditional food categories such as meat, fish and pudding