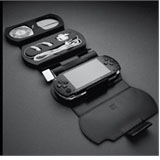 Dunhill is set to launch a compendium of premium accessories, including luxury lighters, pens and PlayStation PSP pouches (pictured) with design by Forpeople, the group born out of Ford’s Ingeni design centre. The consultancy has been working with Dunhill since splitting from Fitch, with which it was closely tied as third party product development consultant in 2004.

The Revolette pen is the first product in the accessories line to launch. It will be followed by an updated anniversary edition of the iconic 1956 Dunhill Rollagas lighter.

According to Forpeople creative director Richard Stevens, the range has ‘added functionality, with an understated twist’. The pen, with discreet propelling pencil and multi-colour functions, is intended to have a ‘James Bond-esque, Russian-roulette feel.’

‘There was great scope in the project to do things with Dunhill that other Richemont brands, such as Mont Blanc, wouldn’t be able to do,’ he says.

Forpeople was initially approached by Dunhill to devise product concepts and experiences that would reflect the iconic heritage of Dunhill. According to Stevens, ‘It would have been criminal not to celebrate what Alfred Dunhill did with product design’.

So far, Forpeople has forged mutually beneficial tie-ins with brands such as Sony, which retails bespoke Dunhill accessories to accompany its technology-based products.

The design group is working with a number of other clients in the aeronautical and telecoms sectors, including Boeing, in conjunction with US design group Teague, and Nokia Design. Although Stevens hints that it is mooting a shift into other sectors, such as food, he is tight-lipped about future plans.

‘We are desperate to move into other areas that are not just about the end product, but about the whole design experience,’ he says.