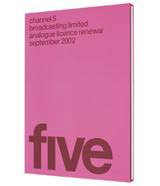 Design is helping business-to-business clients shake off their staid image by finding a point of inspiration and breaking the mould. Richard Clayton reports

A six-figure global literature project for a business-to-business client in IT or telecoms might do wonders for your finance director’s complexion. What big money job wouldn’t in the current climate? But if truth be told though, it’s not the kind of thing that makes most designers leap out of bed on a Monday morning.

Conjuring creative insight from what at first seems unpromising material is, however, what many clients are paying for. How do you lift a generic or traditional corporate project above the predictable or run-of-the-mill?

‘You need to approach the design of a piece and generate something personal,’ he says.

Blue Mushroom used the device of a red box to embody Staffware’s strapline and proposition – ‘the power of process’. Its ‘intriguing presence’ provides a ‘movement’ through all the brand collateral, says Hayward.

Interbrand chief executive Tony Allen warns against ‘obvious labels’ in this sector. ‘It’s too easy to shorthand projects as traditional and miss something special,’ he says.

Interbrand created a fresh look last month for the 130-year-old Institution of Electrical Engineering (DW 30 January). Allen implies a bit of creative tension between a client’s history and a designer’s visual intention can be healthy.

‘Creative insight comes from knowing the client well enough, but not too well. There should be a collision between what we as [designers] want to do for the client and the extent to which the client feels it can move itself. This creates the necessary energy in work that will carry it the distance.’

Good research is clearly central to finding the hidden gems that inspire design routes. Sometimes that involves ‘tearing the brief up’ because ‘some are simply terrible’, Allen asserts. ‘Usually though a brief isn’t “dull” per se, it’s just that it might be written in a confusing or dull way.’

Since consultancies are often responsible for writing the brief after interviews with clients, ‘it’s our fault if we produce porridge’, he adds. But it’s a skill that’s fundamental to what designers do. ‘The reason we are there is because a client wants something more than it can articulate itself,’ Allen says. A good brief will ‘open the door to the personality everyone craves.’

Spin creative director Warren Beeby warns that many companies can be quite internal in their focus. It’s important to see what’s ‘valuable’ about their offer and express it in a way that the relevant external audience will understand.

Interstate design director Jayne Connell says it’s vital to appreciate who’s managing projects and, if possible, to go as close to the top of an organisation as you can.

‘Establishment companies can be so set in their ways and the teams you’re dealing with are often small cogs in big wheels. Middle managers are telling you the corporate line, but if you talk to the lead guys you can tap into their energy.’

The group’s brochure proclaims ‘the establishment doesn’t have to be dull’ – a rallying cry if ever there was one. Connell says many clients can be swamped by their own statistics and designers are often in a position to ‘convert that strategic data into something tangible’. She cites the maxim that brand guidelines should be ‘a lifejacket, not a straitjacket’.

It could be argued that IBM’s late-1990s style of corporate portraiture – all preppy-look heroism and Fast Company kudos – has become a presiding spirit in many business-to-business literature projects. But putting people in the picture isn’t enough, says Beeby.

He shuns the stock catalogue and says there’s no substitute for honesty of approach. ‘Be yourself and do what you think is right,’ Beeby maintains.

Connell agrees, ‘You can’t kid anyone any more with happy, smiley faces. Audiences aren’t going to accept that.’

Sound thinking can always push the client in a bolder direction. ‘Go in search of the metaphor and work it really hard. [That way,] the design doesn’t simply arrive at the first port of call,’ says Beeby.

Allen adds, ‘Clients look for confidence, insight and determination in work that is being presented to them. If it stacks up, there should be no problem in getting so-called “radical” work through.’

And it looks as though there will be more business to come from this quarter. A survey of venture capitalists and technology companies, which features contributions from design group SAS, suggests business-to-business players are taking branding increasingly seriously as their markets get tougher. Eighty-seven per cent said ‘a clear and differentiated position’ was very useful or vital to business growth; an identical number felt visual identity was either a useful or very useful tool.

The challenge for designers will be to break through the establishment mould and deliver more creative solutions. There is certainly room for improvement in the sector’s visual language, thinks Beeby, but this can be construed as a positive.

He adds, ‘When things are formulaic, it’s a nice place to be. It’s easier to break the mould.’

Creativeblade creates identity for Rhythms of the Indus