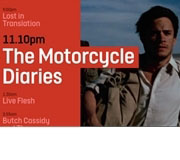 The work encompasses on-air promos, menus and end boards, along with the logo. According to Muckleston, the group was briefed to create a version of the logo that retained the brand values but broadened its appeal.

‘The work has to appeal to a more mainstream audience, but we wanted to keep the coolness of the Film 4 brand,’ says Muckleston.

The new logo replaces the word Four with the numeral and incorporates ‘fairly hard lines’, he adds. ‘We took references from the 1960s and created a very stylised number four,’ says Muckleston.

Jason Smith of Fontsmith says the typeface was inspired by the typography of the Bauhaus and Saul Bass, but retains the feel of the Channel 4 family brand.

Fontsmith, Muckleston and Britton were appointed without a pitch on the strength of their previous relationship with Channel 4.