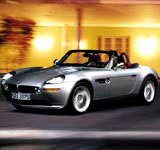 Henrik Fisker is a lucky man. Not just because he is in charge of an experiment that is redefining ‘design’ in the car industry. Nor, because he simultaneously assumes the titles of creative director for Ford’s London Design Enterprise and design director of Aston Martin Lagonda.

No, the Danish car designer is lucky for an altogether simpler reason. ‘My work is my hobby,’ he explains and who would doubt him? He has every schoolboy’s dream job.

As he reverses his black Jaguar XKR into the basement of the pristine Richard Rogers’ building on Broadwick Street, slap, bang in the middle of London’s Soho, you sense his excitement of things to come. His eyes light up as he steps into one of the elevators that whisk you up the side of the glass building overlooking Berwick Street fruit and vegetable market: this is going to be fun.

From the off, the boyish-looking 38-year-old is not short of ideas and talks easily and enthusiastically. He only opened the doors of the Soho studio last week, having upped sticks from America’s West Coast, where he was president and chief executive officer of BMW subsidiary Designworks/ USA.

In his youth, Fisker was fascinated with the design of products around him from an early age, from his Bang & Olufsen stereo to his father’s cars. His design career took off the day he threw his portfolio into the back of his Alfa Romeo and spontaneously drove to the European home of Art Center College of Design in Switzerland. The plan worked.

‘When I was accepted I had to ring my dad and ask him to send some money straight away,’ he says. Dad delivered and Fisker’s career ballooned.

In 1989 he was first offered the job of vehicle designer at BMW Technik, the group’s advanced design studio in Munich, and from there he went on to design the exterior of the Z07 concept car, launched in 1997, and the exterior of the super sleek Z8 Roadster, unveiled in 1999.

Then, in January 2000, he was appointed president of Designworks, with a brief not actually a million miles from the one at Ford now. The result for BMW was a range of brand extensions, ranging from concept cars to snowboard graphics and mobile phones. But that was the past and this is the future.

Despite a face browned by the California sun, and a West Coast accent to match, Fisker is at ease in London and being used to much colder climes is not even deterred by the London weather.

‘I think the Danish grow up with a strong appreciation of design, probably because we spend so much more time in our homes due to the weather,’ he hypothesises.

Sensibly, he tells me has just bought an umbrella for the autumn. It is from a designer menswear collection, but he is not happy with it at all.

‘The design just doesn’t live up to my expectations for the brand,’ he says referring to the functionality of the mechanism. ‘It’s so important to be able to trust a quality brand completely.’

Using this example, he illustrates the challenge that is now facing the team at the Soho studio, which will be working with some of the most high quality car brands in the world – what characteristics should distinguish a Jaguar umbrella from a Lincoln umbrella, and an Aston Martin umbrella, he asks? Quality is clearly paramount in all three designs, but what materials, shapes and sizes might define each product for each brand?

Fisker stresses that this mission is about more than just key fobs and paper weights, which have traditionally been the rather poor limit of brand innovation in this sector. Expect quality and luxury, expect furniture, high-tech products, fashion, and cars, of course. And expect external consultancy work by next year too.

‘Many people right now are talking about brands and how to differentiate them, how to nurture them. But very few people are actually doing this in reality. I think the Soho studio is the sign from the entire Ford group that we are doing it, and we are making a commitment to ensure that our brands keep their character,’ he says.

Having been entrusted with the grand new plan by Ford head of design J Mays, you might think Fisker was part of the old club. But although both Fisker and Mays studied design at Art Center colleges, and both have designed for BMW, they didn’t really know each other until now.

Fisker says the new studio will be run very differently to Designworks in so much as the disciplines, (from vehicle design to fashion, product design and furniture) will be mixed together in an open-plan environment, not separated. Aston Martin’s design team, which he will oversee as well, will also occupy its own small section of the building.

This idea is critical to the creative alchemy he and Mays are now hoping to instill at Broadwick House. ‘Everyone will be hands on, even me,’ he says happily.

It’s great to see that what excites him even more than working life in Soho is the prospect of getting stuck into his favourite hobby once again.