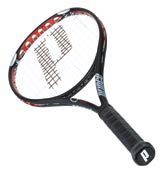 In the tennis world, Prince has an enviable reputation for innovation, most famously the oversized racket head of the 1970s. For its next move within the tough constraints set by the tennis authorities, the company didn’t change racket head or material. The most significant material change was from wood to graphite in the 1970s, and though composites are continually tweaked, there doesn’t seem to be anywhere else it can go for the moment. Geometry, on the other hand, still has potential. Prince’s designers focused their attention on the frame, in particular the holes through which the strings are looped. The company’s latest model, the 03, does away with the usual needle-sized apertures, in favour of massive holes big enough to put your finger in. These are dubbed O-Ports, and allow, says Prince, total string freedom. And such a set-up promises that Holy Grail of tennis, a bigger sweet spot – 54 per cent bigger than normal rackets. What’s more, the O-Ports make the racket more aerodynamic, as they act as wind tunnels. Of course, the proof of the pudding is in the eating. After only a few hits with an 03, there really was a genuine improvement in my shots, with some of them flying across the net at an unexpected pace. Some still went into the net or way out, but that was due to the unfamiliar surroundings rather than any ‘faults’ in the racket.