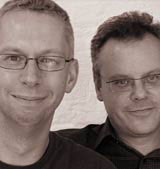 Is it almost two years since Barbara Cassani and David Magliano issued a rallying cry to the designers of Great Britain. ‘You are the world’s best,’ they told us as we all gathered together at the Empire Leicester Square in London. More than 1000 designers nodded in agreement. Yes, we all thought, we’ve given the world Alan Fletcher, Neville Brody, Jonathan Ive and even our very own Ben Millar, along with numerous other design heroes. The Clash’s London Calling played over a rousing travelogue of our capital. We all knew it was our time to help bring the Olympics to London.

The brief was simple: represent London and the Olympic Games. The winning design would appeal to an audience of millions. We all started to scribble away in little black notebooks, account handlers carefully shielding ideas from prying eyes.

It was the design industry’s version of the Olympic ideal. Anyone could enter, it was Eric the Eel from Equatorial Guinea up against the Australian swimming team.

There were a few rumbles of dissatisfaction. A free pitch – outrageous. Never mind that this was a once-in-a-lifetime opportunity – no preferred shortlist, no incumbents with inside knowledge – it was going to be a level playing field. This was as fair as it gets, you could participate or you could throw your toys out of the pram.

The competition was to be run by the team behind Go and judged by a panel of design experts, athletes and representatives of London. Okay, it didn’t meet industry pitch guidelines, but it seemed a price worth paying. So, along with over 1000 others, we chose to participate.

At Kino we have an open ideas culture. It interrupts our sleep, lunchtimes and yoga classes, but it’s worth it for that gut feeling that makes you want to jump up and show everyone your idea.

As part of our design process, work is stuck to the walls for everyone to comment on. We have creative meetings that include the whole company. Everyone participates and feels involved.

This is how it worked for London 2012. We had the initial idea during the Leicester Square presentation and arranged a studio brainstorm early the next day.

London is an incredibly diverse city. We have a multitude of well-loved landmarks. Our heritage is vast. Of course, you could represent the spirit of the city, but that didn’t seem tangible enough for what was required.

We kept returning to the Thames entwined around the words London 2012. But, how could we get the Olympics into the mix? The breakthrough was to depict the Thames as a flowing, Olympic-coloured ribbon. It was the energy of the ribbon that became central to the brand. We also had a sneaky suspicion that members of the International Olympic Committee would appreciate the image of a celebratory Olympic ribbon.

So we submitted our proposals and, like half of the design groups in London, we waited. Then the call came.

London 2012 had recognised the potential of the identity to secure the support of its most important backers – the local authorities, residents and businesses of East London. Without their support there would be no bid.

Then came the inevitable comments that follow the launch of any high-profile brand. Meanwhile, we just continued developing the brand guidelines and supporting tools. When you believe in a great idea you should never waiver.

We received many messages of congratulations from fellow designers. And as long as the identity appealed to and inspired its most important audiences, we were happy.

The logo has now become a daily fixture for most Londoners. It has opened an important chapter in our consultancy’s history, creating exciting opportunities with new and existing clients.

We are enormously proud to have played our part in bringing the Games to our city. We wanted to create a winning logo for a winning city. And that’s exactly what we did.

Andrew Bignell and Andy Stanfield are partners at Kino Design

THIS MUCH WE KNOW

â€¢ Create an ideas culture – on the loo, on the Tube, on your bike.

â€¢ Get everyone involved – design is a community thing.

â€¢ Encourage all staff to communicate with clients – it helps bind relationships and build confidence on both sides.

â€¢ All high-profile design projects will provoke a reaction, so when it’s out there be prepared for a response – have conviction in what you have created and don’t feel the need to defend what you know is right.

â€¢ And on an environmental note – organise for your waste paper to be recycled.