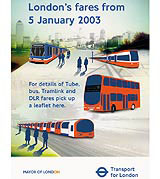 Creator has completed work on Transport for London’s 2003 fare review campaign, its first large-scale project for the organisation since the group’s appointment to the TfL roster in June.

TfL requested an approach that focused on the capital’s disparate modes of transport and made greater use of graphical depictions, as opposed to last year’s more typographical offering, according to Creator account manager Sam Cash.

‘TfL wanted something totally different from last year’s campaign,’ explains Cash. ‘The biggest challenge was ensuring all four networks – bus, Tube, Docklands Light Railway and tram – were treated in the same way and were depicted fairly. We also needed to depict the most modern incarnation of each.’

Leaflets and posters show illustrations of all four modes of transport set against a London backdrop. Posters will act as a call to action for the public to pick up leaflets detailing price changes.

According to a TfL spokesman, the main campaign, rolling out on 29 November, will outline prices on a selection of more popular services. More comprehensive leaflets will be available from 5 January 2003 when fare changes kick in.

Creator will receive a share of TfL’s £340 000 annual through-the-line fare publicity budget for the work. Its contract with TfL runs for three years.

Initiatives can change the face of direct mail as well