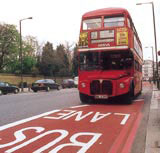 Tackling the sentiment of aversion to the bus (Private View, DW 30 September) is not necessarily concerned with just improving the bus’s design, or for that matter the abolition of the bus lane.

A recent transport survey commissioned by the Government concerning buses has issues relating to the interior, such as cleanliness and lighting, listed a lowly ninth, below: punctuality, information, frequency, waiting provision and the like. Anecdotal evidence, however, implies that perception and environment play a larger role than the survey suggests.

Ask people if they’d prefer to travel on a tram or a bus, and many would choose the tram. Why? Modern trams and buses have similar ride quality, features and facilities. This perception problem poses a predicament for local councils and bus manufacturers. Tram systems and infrastructure are expensive; a bus network can be implemented at a fraction of the cost. It is not only in attracting passengers where the bus often fails, but also in what we expect of a modern, future-thinking city.

Would people prefer a No 68 clattering past their office window, or a swish ‘continental’ tram whizzing by? This question appears inane. Somehow it seems the bus just doesn’t belong. What of the other road users? The frustrated driver is at the mercy of the inexplicable bus lane and the frequent stop-start interruptions to their journey.

The cyclist has the unenviable privilege of sharing a lane with 12 tons of diesel-powered kamikaze, and the pedestrian always has the niggling fear that one day they may just get hit by it.

The only people who seem to benefit are the advertisers, which without their moving billboards, couldn’t hope to reach a wider audience. If it wasn’t for marketing revenue we might accept that the bus is dying, and no amount of Government and council incentives would prevent its extinction. Like the fiery end of one dinosaur population to another, at least this one would free up the bus lane.