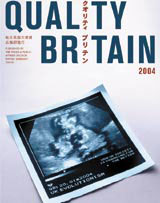 Johnson Banks has created a masthead and cover image for the British Embassy in Tokyo’s annual publication, Quality Britain. It is the group’s first project in Japan.

‘The magazine reflects that we invest time in charity and there is Japanese interest in the British approach to charity and the welfare state,’ he says.

To sum up the theme, the cover image of the magazine is an outline of the map of the UK in the style of a baby scan, Johnson adds. The masthead has also been updated and now features a combination of English and Japanese text ‘reading through each other’.

‘We found a way to mix the two languages, rather than splitting them in the normal way,’ explains Johnson. Vertical Japanese text spells the phrase ‘Quality Britain’, while the name is spelt out horizontally in English.

The group was appointed on the back of Johnson’s participation in a trade mission to the country in August last year.