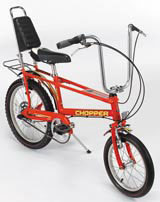 Thirty-five years after it first skidded into the playground, the Raleigh Chopper is back. The bike that coined the ‘ape-hanger’ handlebar and casually oversized seat is set to return to the streets of Britain from April. Despite some controversy over the original designer – Raleigh’s chief designer at the time was Alan Oakley, though inventor Tom Karen is reported to claim credit for the prototype – the relaunched model retains the infrared colour, backrest, springs and ‘arrow wedge’ frame of its predecessor. One noticeable change, apart from the alloy rather than steel frame, is the gear shift. ‘The gears are still the Sturmey Archer 3-speed, but now the shifter is on the handlebar and not on the top tube,’ explains Chopper product manager Loz Cox. The new Chopper will retail at £200.