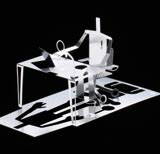 When product designer Sam Buxton wants to do business with you, he produces a card that unfolds into a 3D replica of himself. He calls it his Mikro-man.

Buxton is an unusual designer. Ron Arad, who taught him at the Royal College of Art, says: ‘Sam creates rather than joins the jargon. He does things that weren’t there before. He’s very cerebral, intense in his thinking and comes up with designs that are really his.’

Buxton has been shortlisted for the Design Museum’s 2004 Designer of the Year award for his Mikro series and his technically ambitious prototypes of an electroluminescent table and clock (DW 8 January). David Adjaye, one of the award’s judges, called Buxton a ‘design prospector’. He was chosen, Adjaye says, because ‘his designs are in a completely different category to everyone else’s. Sam is looking at things we take for granted. He’s not just a problem-solver, he looks at new potentials and investigates them in a personalised way’.

It’s a far cry from Buxton’s days at Middlesex University, where he studied furniture design before joining the RCA in 1997. After graduation, he shared a studio with fellow RCA alumnus, Danish designer Mathias Bengtsson.

Buxton is affable and enthusiastic, engaged with and intrigued by the possibilities of design. He brings a map of the Tokyo subway to the interview, from a recent visit. I’m not surprised to learn he navigated with ease around the notoriously complicated network.

He is interested not in creating new boundaries, he says, but in blurring existing ones. ‘I really like the idea of ambiguity in what I produce. People find certain things, but they are not totally sure whether it’s obviously a piece of design, art or science,’ he explains.

Buxton has created projects for brands such as Kenzo and Habitat and he is currently working with Vauxhall and Swarovski, but he doesn’t feel constrained by commercial projects. ‘It can be a challenge to make something beautiful and interesting and make it accessible,’ he says. Besides, the proceeds from this work fund his real passion – his own projects.

It is ironic, therefore, that one of Buxton’s own projects, the Mikro-man, has turned out to be the most commercially successful. The idea was simple. ‘I wanted to make a business card that was more interesting,’ he explains. ‘The normal ones are so boring. All they are is an invitation for you to go and look elsewhere. I thought it would be interesting to produce a card that became a piece of work in itself.’

The Mikro series is growing into a window into Buxton’s imagination, including Mikro-man in the jungle, Mikro-man in hospital, a Mikro-house and even a Mikro-city.

The Mikro-city was the most popular exhibit at the Design Museum’s European Design Show last year. Alice Rawsthorn, the museum’s director, was enthralled, calling it ‘clever and seductive’. ‘Sam swept the board with it. People spent hours poring over it,’ she adds.

Rawsthorn believes Buxton was shortlisted for the award because of his humane vision. ‘The judges were captivated by his work,’ she says. ‘He has a very distinctive, visual sensibility and a common language running through his work.’ So if the Mikro series struck a chord, it is likely that Buxton’s other big project, the Surface Intelligent Objects, of which the electroluminescent table and clock form a part, will have a similar effect.

The Sios Table is designed to be an ‘active surface’. Positions for plates and cutlery are all outlined into illuminated shapes. The striking use of electroluminescent material, manufactured by Elumin8, provides what Buxton describes as a ‘way in’. A table represents people congregating, perfect for Buxton to ‘mess around with’. If you separate the shapes, the idea is to explore the idea of space and how people interact with it.

The Sios Clock, a monolith made up of a mosaic of shapes representing hours and minutes, is designed to ‘make time more of a living thing’, the designer explains.

Buxton concedes that ‘you make what you can’ and some of his projects are currently on the shelf. He recently created ‘a space within a space’ for the new Hub gallery in Lincolnshire, using laser-cut sheet metal. He breaks into a smile. ‘Some people were scared of it.’ It was a bit of a shock, he admits, because ‘the gallery’s first idea was to have a rug on the floor with two chairs on it’.

He describes himself first and foremost as an ‘ideas generator’. ‘I think about things a hell of a lot. Sometimes ideas come quickly. Other times you have to really fight for them,’ he says.

Buxton’s irresistible designs for the future are undoubtedly set to grow and grow. ‘I don’t like the idea of being one thing. I know that for sure,’ he says, adding, ‘I suppose I’m restless.’

Buxton’s designs and the work of the other three Designer of the Year nominees will be shown at the Design Museum, Shad Thames, London SE1 from 6 March-13 June. The winner will be announced in May. Go to www.designmuseum.org for more information