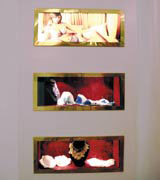 Portland Design has been working with Dorothy Perkins at revamping its in-store look. The design of the lingerie department separates the underwear-buying experience from the rest of the store.

Ibrahim Ibrahim, managing director of Portland Design, says, ‘When you go into the lingerie area of M&S, you could be in any part of the shop. The clutter and ambience of the rest of the store is there. We wanted more warmth, plushness and sensuality. ‘It needs to link into the customer’s psyche.’

Ibrahim argues that department stores such as M&S and British Home Stores need to adapt their store design to the customer experience. Last year, Portland Design worked with luxury underwear retailer Rigby & Peller to bring its traditional take on lingerie (it supplies corsets to the Queen) into the modern era.

‘The brief was to retain its premium quality, but reposition the brand for a younger audience,’ he says. ‘Lingerie is a fashion statement, and the retail environment needs to keep up with changes in the market.’

The consultancy made the brand more contemporary through a new in-store look, which used the materials of the lingerie product as part of the architecture. Glass panels, for example, were interwoven with lace.

This week, Europe’s leading underwear retailer Palmers rolls out its new-look concept store in Austria. Designed by Universal Design Studio, it claims to be an underwear store for the 21st century (DW 22 July). It shakes up a brand that, like M&S, was more rooted in tradition than in customer experience.

Palmers head of shop design Susan Strobach says, ‘Palmers has been selling underwear for 90 years. Its shops are full of thousands of drawers. We wanted to find an interior design that has relationship points to underwear. We wanted it to be soft and feminine, and very clearly defined as a lingerie store.’

Palmers saw a new mass market in underwear retail encroaching on its territory and wanted to do something radical to create stand-out in this field. It chose Universal’s concept, based on the idea of a garden, with rigid formal areas and looser organic spaces dividing up the stock range. ‘The garden metaphor allowed us to organise the stock into dense areas, like a hedgerow, and more open areas,’ says Universal director Jonathan Clarke.

This gave the store a feel of high-end couture retail, where stock is usually minimal, while maintaining the choice of the high street. ‘If you look at Gap, the store interior is very balanced,’ Clarke says. ‘There is no difference from the front to the back. But people are more influenced by their environment today than 20 years ago.’

Clarke would like to see more of a high-end attitude brought to the high street in general. Universal is working with a New York-based underwear retailer on a store opening in November, which brings a new slant to the lingerie market.

US retailer Victoria’s Secret now has 2000 stores in the UK, with building design and brand direction by David Collins. It has recently moved into make-up, following a concession deal with Pout. Pout describes itself as the ‘underwear of make-up’, with stores designed with a boudoir in mind. Founder Chantal Laren says, ‘It’s very important to have an environment that represents the brand. The retail process should emulate and trigger the brand emotions.’

Agent Provocateur has kept tight control of its brand, refusing to go wholesale. Rees says that this accounts for its success. ‘It needs to be in its own environment – a one-to-one, intimate place,’ she says.