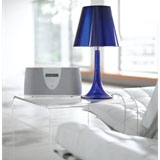 BT has unveiled its latest drive into the consumer entertainment and communications market, revealing the work of a host of designers for its new portfolio of broadband products.

The products come in response to growing competition within the broadband and landline market from mobile retailers such as Carphone Warehouse and Orange. They represent an aggressive move by BT to stake a claim in consumer entertainment through its TV service, BT Vision, which launches in the autumn.

BT Vision is being billed as a digital TV service, combined with broadband-powered on-demand film, TV and music, including Internet radio. The project will feature on-screen graphics and branding by Dunning Eley Jones, and a central product, the BT Home Hub, designed by Priestman Goode.

The Hub is a wireless router that transmits data through the home. It can connect to up to 15 devices, including laptops and games consoles, along with BT Vision. It has been designed to ‘be on show in the centre of the home, a product people are proud to own’, according to Priestman Goode director Paul Priestman. The Hub is the first in a series of house-style products that Priestman Goode will design for BT, following its appointment to the role of product design guardian after a four-way competitive pitch 18 months ago, says Priestman.

‘We were appointed to review and oversee every product that BT issues, as part of redefining the product identity for BT,’ he says.

‘The new product identity is about honesty, character, a sense of quality and a much more domestic, rather than engineering, approach to design,’ he adds.

Priestman says the approach is a new one for BT. ‘Existing BT products don’t compete on a design level with products from [brands] such as Panasonic and Sony,’ he says.

BT will also unveil a series of other branded products, including an Internet radio (pictured top) that will launch alongside BT Vision in September. Designed by Therefore, it will enable users to listen to Internet radio channels and music stored on their computer throughout the home, rather than through a computer.

According to Therefore director Graham Brett, it offers a ‘fun, modern, clean and portable’ aesthetic, and has been designed to appeal to a broad demographic. 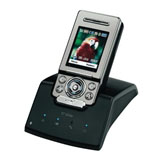 BT also officially launched its Bluetooth phone, the BT Glide (pictured), designed by Alloy. According to Alloy chairman Gus Desbarats, the group was briefed to create a phone that would appeal to ‘young, early adopters with a connected lifestyle’.

The phone is the first in a series of ‘higher-margin’ products that Alloy is creating, according to Desbarats. ‘BT has recognised that there is a market for people who are willing to pay more for a highly designed product,’ he says.

• BT is broadening its target beyond household communications to entertainment services, through the launch of BT Vision

• It is working with product designers, including Priestman Goode as product design guardians, Therefore and Alloy, to create a range of supporting devices