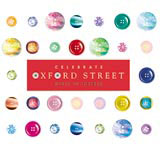 Dvision Create has designed the logo and branding for a ‘celebratory street party’ on London’s Oxford Street on 1 October.

The theme for the party is ‘Dress to Impress’ and it will focus on London’s fashion credentials. Retailers in the street are adapting the theme to their store interiors and organising catwalks, makeovers and street theatre.

John Lewis is dressing up its store in the style of a cocktail party, with black, silver and white window displays, by its in-house team, and in-store features.

The street party is part of a campaign to boost tourism and retail in central London, which underwent a slump after the terrorist attacks in July. Oxford Street will be closed to traffic for the first time in its history and big screens will be installed.

Stores such as Selfridges, HMV, Debenhams, British Home Stores and House of Fraser are also taking part in the event, which is being co-ordinated by the New West End Company.

‘We’re bringing retail theatre to the street,’ says Jace Tyrrell, head of communications at the New West End Company. ‘We want to position Oxford Street and the West End as a top fashion destination to rival Paris and New York.’