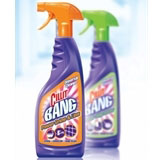 Household products giant Reckitt Benckiser is to roll out a global packaging refresh for its Cillit Bang cleaning range, with design work by Slice Design.

The packaging initially launches in the UK later this month, followed by distribution to markets in continental Europe, Asia Pacific, North America, South America and Africa.

Slice Design was briefed to improve consumer navigation and unify the range, while also making a clearer differentiation between the variants. The primary logo has been redrawn to create stronger visual impact and the consultancy has organised the products into colour-coded categories based on usage areas, such as kitchen or bathroom.

‘There is a certain naivety to the design, like a pound-shop window or superhero brand, which we have kept. But we’ve addressed the typography, tweaking the embossing and depth of letters to aid legibility,’ says Slice Design creative director Alan Gilbody.

According to Gilbody, the fluorescent inks used on earlier packaging have been replaced with four-colour labels due to production costs. ‘It has been a challenge to get the same impact as the fluorescent ink, so we have tried to maintain distinctive colours for each of the ranges using four-colour printing,’ he says.

Cillit Bang has proved to be one of Reckitt Benckiser’s most successful launches, delivering sales of more than £140m globally in the first 18 months after its launch in 2004, according to Gilbody. The brand is now distributed in 35 countries.

Slice Design is responsible for global design of the Cillit Bang brand and is working on extensions to the product family that will launch throughout this year.

Reckitt Benckiser last week posted first half revenue growth of 18 per cent to £2.4bn and raised its financial forecasts for the full year. According to chief executive officer Bart Becht, the recently launched Cillit Bang Stain & Drain was one of the key products contributing to the performance.

In October 2005, Reckitt Benckiser acquired Boots Healthcare International for £1.9bn. Marketing of the former BHI brands has now been integrated into a single function, according to Reckitt Benckiser.