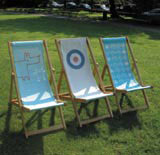 The Great British deckchair has had a lick of summer paint by the good people at Four IV. Presumably initiated during a ‘let’s go and work in the park this afternoon shall we’ session, the consultancy’s creatives finally settled on five British designs, one inexplicably featuring a cartoon dog. They then teamed up with seating design specialist Southsea Deckchairs to turn the designs into reality. Apparently they’ve now planned a ‘sit in’ in close proximity of Blackpool Councillor Lynn Cole, to protest at the town’s recent ban on the chairs. The ban was introduced after, not before, the little beauties were designed.