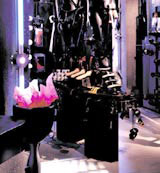 Elektra worked as consultant lighting designer with Silver & Co and MHG on the SoHo brand for Ann Summers. It is also involved in the core re-branding, though was not mentioned in your piece (News, DW 26 April).

It is as if you think lighting designers don’t exist, but this image (below) of Ann Summers shows the difference that lighting makes. Look at the harsh, threatening shadows. Look at the prison bars on the floor – a theatrical projection effect. The linear wall lights (custom-built for this project, as nothing available in the UK was just right) add a dark, night-time blueish ambience.

Imagine the scene with fluorescent strip lights on the ceiling instead.