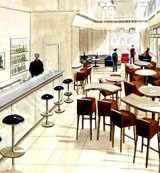 Nelson Design is working on an extensive development programme for Corney & Barrow Wine Bars, including a new outlet in central London and the redevelopment of its Canary Wharf and City of London branches.

The consultancy is redesigning the Canary Wharf branch, due to open on 8 May. It has also been appointed to work on the development of the new City bar, which is due to open at the CityPoint building, on London’s Ropemaker Street, in September.

Corney & Barrow will reopen its flagship branch at Broadgate Circle in December.