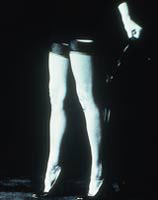 You could argue that having an art exhibition at the Crafts Council is somehow a misnomer. But then the Crafts Council has always been concerned with makers and everyday life, and its forthcoming exhibition, Approaching Content, is no exception. As Jonathan Parsons, artist and curator of the exhibition states, the key argument is, ‘what something is, how it is made and seen, is more important that its context or origin’. And since the background of an artist is ‘less important than what they have made’, it’s no surprise that of the eight names featured four are not trained in the fine arts.

There’s Lin Cheung, a jeweller by definition and trade, who gives names to her pieces and treats them like sculptures. Memoria, a pair of earrings in 18ct gold, have butterfly clips at the back, but ‘the only time you see how they are made is when they are displayed as sculptures’, says Parsons. Deviant ring is an oversized, parody-like ring, one though that is still displayed in a ring case and made to look like ‘a fabulous sculpture’. ‘Because of the attention to the materials and how they are constructed, Cheung makes us look again at everyday things that we would normally wear,’ says Parsons.

Kate Owen, originally trained as a letter cutter, uses her trade to create conceptual letter pieces. Cartoon Works is a series of onomatopoeic, fun words that regain their gravitas by being carved in slate. The word becomes the material, and the process can be observed is the final artwork. Another artist on the borderline of disciplines is Tracey Rowledge, who uses bookbinding and exquisitely delicate materials such as goatskin to inscribe what at first glance appear as abstract scribbles.

A sensuous, stiletto-clad photograph by Jemima Stehli will be the first ever large-scale print piece shown at the Crafts Council. A re-enaction of pop artist Alan Jones’ work, it shows a sexualised image of a women – in this case Stehli herself – holding the cable release bulb of the camera. As Parsons explains it, ‘She is making the moment of a photograph construction part of the content.’

Parsons is also showing his work, ‘since I am an artist and want to emphasise my role as artist’, he says. Phantom, a ‘sculpture of a flag’ is made exactly like a flag, but in nylon mesh sewn together by nylon thread and suspended. The transparent quality means that ‘the only visual content it has is its method of construction. There’s no signalling qualities, no hierarchical heraldry. You can see just how it’s made’. This work is an extension of Parsons’ flag pieces, which he has exhibited extensively.

So will Parsons turn to curatorship after the positive experience of Approaching Content? Over the past few months he’s been extremely prolific, finishing a show at Richard Salmon and opening another one of new works on paper at London’s Percy Miller Gallery. Parsons mentions possibly putting together an exhibition of international painters, but not in the near future. In the meantime, we can savour his efforts in breaking down boundaries, analysing methods of construction and engaging the viewer.

Approaching Content is at the Crafts Council, 44a Pentonville Road, London N1 from 6 February until 23 March. Jonathan Parsons’ Works on Paper is on at the Percy Miller Gallery, 39 Snowfields, London SE1 until 14 March