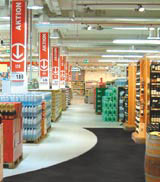 The consultancy is developing in-store formats and communication, as well as product presentation and ‘brand reinforcement’ through tone-of-voice and signage. The first store scheduled to launch is a Vienna-based supermarket, which opens this month.

Two further 5000m2 stores are also being overhauled in Graz and Linz and are due to open in February and October next year.

The group joined the Vienna project ‘midway through’ its development, says Rook, and was asked to review the design plan. ‘I would not say it was dull – the fixturing was perfect – but it lacked emotion, there was no sense of a journey through the space,’ Rook observes.

JHP organised the layout into three main areas, putting non-food in the centre of the store in a ‘warehouse’ format, making the dry food area more of a ‘destination’ and livening up the fresh food market, Rook explains.

Liberal use is made of the Interspar red on banners and columns, with a colour-coded ticketing system – brown for non-food, white for fresh produce – also being adopted by the chain.

A space close to the entrance serves as an ‘exhibition stand’ for more ‘theatrical’ product displays and uses spotlighting effects. ‘It’s more like a fashion idea,’ adds Rook.

Rook describes the non-food area, which stocks homeware and stationery, as a ‘quality environment’. The rest of the store is ‘hard hitting on value, like Asda with a bit more design,’ he says.

The consultancy was appointed to the project six months ago without a pitch.