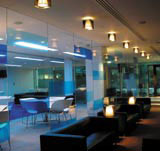 The group has been working on the project since November 2004 and the ITV space opens this week.

In the daytime, the 3000m2 area serves as a formal area for meetings and screenings, whereas late in the day it becomes a pre- and post-show hospitality and members’ bar area and may also be used as an interview set.

‘It had to appeal to a very broad church because it is for the entire population of the ITV/Granada headquarters on the South Bank, functioning from early in the morning until late at night,’ says Jackson.

A stone floor has been introduced throughout the split-level space, which is divided by a full-height glass screen into a main zone and a VIP area, all with views of the River Thames. A 10m counter in dark timber veneer is the only fixed object in the entire space. The remainder of the furniture is moveable or stackable, to enable users to transform the area for different purposes.

The project also called for a graphics package. Electronic dot matrix signs in the style of the studios’ ‘on air’ signage are used to signal private functions, while the same pattern has been employed across a flat backdrop of photographic images in the lobby entrance and behind the serving counter.