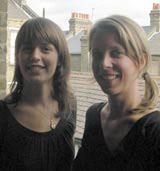 Spend an hour with Kirsty Carter and Emma Thomas, aka Apfel, and it’s hard to believe they are just two years out of the Royal College of Art. They clearly can’t believe it either: asked when they graduated, both say 2002. Moments later, they realise it was, in fact, 2003. Their confusion is understandable: Carter and Thomas have enjoyed such a fruitful, fulfilling first two years it feels like they’ve been around a lot longer. And they’re both just 26.

The group has just completed its biggest project to date – a complete redesign of the magazine Architects’ Journal, which hit the news-stands in early June. The result is cleaner: features pages are designed to resemble an architect’s drawing board and a new typeface, Accurate, is easier to read. As a reward, they’re flying off to the Venice Biennale to write an article for AJ. Apfel counts Tate Modern and the British Council as regular clients, and a few months ago the group’s ad hoc work for London’s Institute of Contemporary Arts – including identities for shows such as Post Notes, Martha Rosler’s London Garage Sale and Beck’s Futures – was secured with an 18-month contract to design show print material under director of exhibitions Jens Hoffmann. Ever since the pair criticised some ‘unreadable’ upper case type in the ICA that turned out to be Hoffmann’s own work, the three have enjoyed a good relationship, complete with ‘heated discussions’. ‘He likes the sentiment of our work,’ says Thomas.

The name Apfel is taken from a book by philosopher Michel de Certeau called The Practice of Everyday Life – ‘we loved the cover’. The group is at a major junction in its development. ‘We’re thinking hard about how we want to progress,’ says Carter. ‘We’re busy enough to employ someone, but that feels so final. It’s difficult to imagine bringing someone into this studio. We want to keep the variety of our clients, not snowball into something big.’

The Clerkenwell Green Association (a collective of small designer-maker and graphics studios) has awarded Apfel a grant, which paid for half the first year’s rent on its sunny studio in London’s Bethnal Green. It also has a part loan from the Prince’s Trust, much of which doesn’t have to be paid back because Carter is dyslexic. ‘That has been a great help,’ she says. ‘It’s eased the pressure on Emma as she constantly has to help me and look at everything before we send it off.’ Just as useful was the free legal advice from law firm Lovells on drawing up contracts. ‘Clients are often surprised we have terms and conditions,’ says Carter. ‘It’s astonishing.’

Apfel has collaborated with other designers from the outset, a process the duo finds both refreshing and useful, as it often leads to new work. It has formalised regular work with graphic designer Anthony Burrill, which is credited Apfel AB. Apfel’s first joint project was an invitation to an artists’ show at the Loman Street Studio, called Ways of Saying, which led to Art Inspector for Tate Modern – a witty spotter’s guide to works of art. Another small, stylish job followed for Burrill’s own agent, Siobhan Squire, and then a graceful booklet for a Dutch design installation at Milan, called Grazie Dei Fior. The duo collaborate regularly with product designer Onkar Singh Kular, with whom Carter first worked at the RCA on his ground-breaking Pantone mugs project, designing the colour chart. Now Apfel and Kular are working with Dunne & Raby on a show in Israel.

‘We don’t have a recognisable style,’ says Carter, ‘but hopefully our thought-processes are obvious in everything we do. Everything we design has to have a reason for being there, nothing is arbitrary.’

Being 26, and looking even younger, has only had a few drawbacks. An ‘unnamed’ potential job with an architect went nowhere when they met and the architect seemed somewhat taken aback by their age. But, as Thomas says, ‘We wouldn’t have wanted to work with him anyway.’ The pair are intelligent, business-savvy, talented graphic designers, open to new experiences. ‘We might move abroad for a time, either together or separately,’ says Carter. ‘I’d love to spend a few months in New York.’ It’s not surprising they never considered working in a consultancy. ‘You can’t be flexible. And we have too much to say for ourselves.’