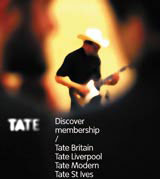 The Tate has redesigned its entire membership collateral for the first time in five years, working with NB Studio.

The consultancy was appointed to the project without a pitch in January 2004 and was briefed to redesign material spanning all four Tate galleries, in a bid to boost membership levels.

It has reworked membership cards and handbooks and developed promotional material including posters, fliers, stationery and bags for Tate Members, the organisation’s registered charity.

The work also includes the organisation’s first membership welcome pack, which will be sold in Tate shops as a gift item. All of the designs are expected to launch in mid-July.

‘There was a strong brief to create a physical product – we wanted to give our members something concrete to show evidence of value for money,’ says Kate Huntington, members marketing manager at the Tate.

The existing membership material, based on Wolff Olins’ identity work, was considered ‘rather tired’, she says.

The updated membership collateral features ‘bright, bold and colourful’ photography by Matt Stuart, showing people gazing at artwork in the galleries. The images are blurred so as to ‘be on brand’ with the current Tate identity says Nick Finney, creative director at NB Studio. The membership pack is bound in a ‘cool grey’ uncoated stock.

There are 70 000 Tate members and the scheme is considered a key growth area for the organisation, having gown from 30 000 registered members in 2000. Contributions help fund exhibitions, collections and education programmes.

The Tate does not have a formal design roster, but works with consultancies on an ‘ad-hoc project basis’. It occasionally holds pitches, but typically approaches groups directly, explains senior design manager Emma Clifton.

NB Studio has been working on design projects with the Tate since 2001. It most recently created graphics and marketing materials for the Joshua Reynolds exhibition, which opened at Tate Britain at the end of May and runs until 18 September.

DESIGN groups WORKING WITH THE TATE