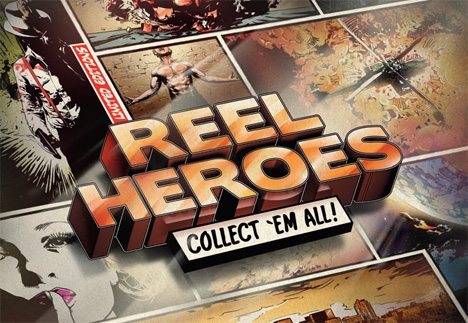 Hicksville has designed a collection of limited-edition DVD sleeves for a range of Universal Pictures films named Reel Heroes.

The range features films that have a theme of heroism running through them, including Shaun of the Dead and the Incredible Hulk.

Hicksville was first appointed to the work in September after being approached directly by Universal’s international product director Carlie Spiteri, who came to the consultancy with the idea to create the range of sleeves.

Hicksville’s designers and Spiteri collaborated on both styles and references from an early stage, although the original brief was always ’comic book adaptations of existing sleeves’.

Rennie Mitchell, Hicksville’s creative director, explains how the consultancy found the inspiration for its approach to the project by mimicking styles from Marvel and DC comics from the 1970s and 1980s along with more recent graphic novels. ’We made notes on vernacular, fonts, line styles, even paper stock, registration ads and all the stylistic elements that make comic books so alluring and nostalgic,’ Mitchell says.

’We tried several styles and approaches, some using central characters to launch the brand. Others using generic “action” type imagery and we pitched these along with different designs for the brand’s logotype,’ he adds.

The format is carried across a total of 12 titles, which are due to be rereleased exclusively within HMV stores in August, with Hicksville also designing the marketing and promotional materials. The brief initially came from the international Universal team, although it was the UK-based team that saw the potential in pitching the range to the UK’s only remaining specialist retail outlet HMV.

After successfully pitching to the entertainment store, HMV confirmed its interest in bringing the range exclusively to its stores.

Matthew Chalkly, HMV’s managing manager for campaigns, says, ’This range emphasises the films’ comic book origins with cool and collectable artwork that will appeal to fans of both the films and the source material.’

A Notting Hill restaurant is my home from home…