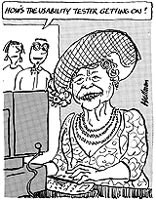 This week’s Top 100 survey shows companies working in Internet design making a big impact on the UK design economy. This is so different from my first observations on the scene in late 1996, when UK-spawned companies such as Webmedia, Hard Media, Online Magic and MetaDesign experimented with the concept of being an Internet design company.

Designers have moved from creating essentially glorified hypertexts with pictures, to the cutting-edge of the new economy, conceiving interfaces to complex products such as on-line banking, e-commerce shopping sites and share dealing systems. This has tended to put technology in the driving seat, as shown by the rush to market of our share option-fuelled dotcom twenty-somethings, leaving those expected to use these products frustrated. Design’s reputation, currently on a high, will suffer if this situation isn’t reversed, and the potential of our brave new network society will also be severely undermined. Where do we start?

Design is a combination of creation and inspiration combined with rational analysis, problem solving and iteration. These latter elements need emphasising, not only because clients can engage with them more easily, but also because the people who use the final product will benefit. The clearest examples of a measured approach to design for the Internet are usability and usability testing.

How do we approach assessing usability? “Does the product communicate a sense of its purpose, how to begin and how to proceed?” is the first question California-based designer Lauralee Alben asks. “Are the product’s features self-evident and self-revealing? How well does the product support and allow for the different ways people will approach and use it, considering their various levels of experience, skills and strategies for problem-solving?”

A product can only be considered to be usable (or unusable) in the context of its target audience and the specific tasks it is intended to be used for. That said, we are all familiar with poor usability on the Web – sites with graphic-heavy pages that are aimed at users on modems; forms on e-commerce stores that force Londoners to fill in the county (or state of the union) in which they reside and then fail to flag up clearly the “mistake” they have made, navigation systems that reflect a company’s organisational structure rather than the users’ tasks.

Poor usability undermines the overall “quality of experience” (a term coined by Alben) that design can bring to a product, and it is relatively easy to avoid. Clients and designers need to think clearly about their intended users (and do research where appropriate) so they can model their objectives and “headsets”, their way of working and the competing pressures they are under, as well as their level of experience and access to the Internet.

Usability testing is the method for checking the extent to which the resulting design solutions work. Testing needn’t be done on a finished design and generally works best when it is applied from the early sketch stage and throughout the design process. Neither does it have to be expensive or involve lots of users. According to usability guru Jakob Nielsen: “Elaborate usability tests are a waste of resources. The best results come from testing no more than five users and running as many small tests as you can afford.”

It is remarkable what insights usability testing can bring, even with the most well-considered designs. As Nielsen observes: “The most striking truth is that tests with zero users give zero insights.”

Getting usability and usability testing into the product development and design process isn’t easy, but organisations will save on the bottom line if they do it properly. Telephone and e-mail support enquiries will be reduced, fewer shopping trolleys will be abandoned before the checkout and customers will get stronger brand experiences, resulting in greater loyalty.

We should see usability as part of a wider set of skills and disciplines that make up the profession of “experience design” (a term pushed by the US-based Advance for Design forum) and it shouldn’t be championed to the exclusion of those other elements. Nor should usability be used as a reason to “dumb down” design to some lowest common denominator in pursuit of universal accessibility, unless a product is really intended to be used by everyone on the planet.

To their credit, some UK design companies have made usability an integral part of their process. Most bring in outside experts and a few have even created usability laboratories. If other companies put usability further up their agendas they will win respect and influence with clients and help justify the reputation of design in the wider world.

Mat’s the way to get drinks industry contracts