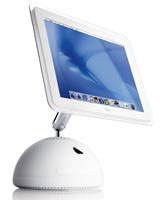 Steve Jobs, founder and chief executive officer of Apple Computers, is sipping tea and describing what he sees as the acid test for any manufacturer that claims to be really serious about design and innovation. Attired in a black T-shirt in his minimalist London hotel suite the morning after a night of triumph at the 2002 D&AD Awards – his vice-president of industrial design Jonathan Ive at his side – Jobs quietly tells me about the ’scary part’ of his work.

It goes like this he says. The product is behind schedule. Do you take the time to get it exactly right and risk screwing up the launch and sales next quarter? Or do you rush ahead and accept less than the very best? ’That’s the moment of truth, whether you really care about design as a company,’ he says.

Everyone knows how much Jobs cares. Apple products don’t go out there until they are exactly right in every way. That’s why D&AD juries have been showering the company with Golds and Silvers ever since the Apple iMac swept the board at D&AD in 1999. This year the rollcall of honour includes two Silvers for the iBook and Titanium PowerBook G4 and a Gold for the Apple iPod, a beautifully functional MP3 player.

’The consequences [of a delay] are hard for everyone. You’ll be late, it takes longer – everyone feels pain,’ says Jobs. ’You have to get the organisation to understand the gain is bigger than the pain. The latest iMac, for instance, took longer than we thought it would. We’re taking Humpty Dumpty apart again, but will we put him back together a better way?’

Jobs has the knack of ensuring all his Humpty Dumpties enjoy a fairy tale ending. The credits on Apple’s D&AD-winning projects include his name alongside that of Jonathan Ive and other designers. This is no corporate magnate’s affectation, but a genuine reflection of how things work inside Apple.

’Honing and crafting a solution is essentially organic and holistic,’ says Ive. ’So much of our design process is a design conversation, about a story.’ Jobs interjects, ’It’s not like I come along and say “I’ll have one of those”. Instead I’ll come in with 38 stupid ideas and eventually we’ll hit on something sweet, something that starts to solve problems. The basis is figuring out what problems you have.’

Apple had problems aplenty in the 1990s. The company, founded by Silicon Valley whizzkids Jobs and Steve Wozniak back in 1976, appeared to have lost its way. It chased after new market trends, often getting it wrong. Ive had joined Apple from London-based consultancy Tangerine in 1992 and assumed the chief design role in 1996 upon the appointment of a new chief executive officer, Gil Amelio, against a chorus of scepticism in the trade press back home.

Ive immediately made his mark with the Apple e-Mate, which won a D&AD Silver in 1997, its translucent, moulded casing and bold form signalling a creative departure from other laptops. But Apple’s reconnection with its core values of design and innovation was sealed by the return of Jobs to the company in an ’expanded role’ after Gil Amelio resigned in July 1997.

Jobs had been away from Apple since 1985, the year after the launch of the Apple Macintosh reinvented the personal computer. His extra-curricular activities included the NeXT educational computer and the founding of Pixar Animation Studios, the Academy Award-winning animation studio, whose films include Toy Story (1995), Monsters Inc (2001), and the forthcoming Finding Nemo (2003).

Back in charge at Apple, Jobs set the company on a now-familiar course with the mould-breaking Apple iMac, Apple’s computer for the new millennium, which was launched in 1998. But when I ask him about the origins of those candy colours and gorgeous translucent mouldings, he insists I’m missing the point. ’The Apple iMac is an all-in-one computer that goes back to Apple’s roots. Consumers wanted the simplicity. That was the real design challenge. Everything else came from that.’

In fact, despite receiving a standing ovation at D&AD by Britain’s creative community, Jobs and Ive argue that design is only a small part of the total picture. ’Winning awards is not a victory for design,’ says Ive. ’It’s a victory for caring about making the very best computer or portable MP3 player.’

And there is more to come. Product launches include a faster iBook, a desktop eMac for education, a second iPod and a new PowerMac G4. All this alongside the acclaimed new iMac, with its orb base and a 15in LCD flat screen. Apple posted profits of $40m (£27.7m) for the quarter up to 30 March, an upward trend with international sales accounting for 45 per cent of income.

Yet amid this frenzy of activity, the duo responsible for Apple’s current hot innovation streak still found time to make a rare appearance on the London design circuit. Why do they take the D&AD Awards so seriously? Jobs claims that, while the Clios set the benchmark in global advertising, D&AD is the only product design competition that has a truly international span. ’Look at the shortlist,’ he says. ’The Mini Cooper is German-owned. The Muji CD player is Japanese. The Plateau desk is British. Apple is American. I’m not aware of any US award scheme that takes product this seriously.’ He pauses briefly. ’There’s a hole.’

For the only time in our interview, he looks genuinely puzzled.

1989 Graduates from Newcastle Polytechnic, now University of Northumbria at Newcastle, and forms Tangerine