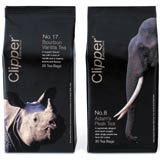 In the week that Williams Murray Hamm saw its sales-boosting designs for Jaffa Cakes axed by McVities, the consultancy scooped the Grand Prix at the Design Effectiveness Awards.

WMH’s entry, for the redesign of Clipper Teas four years ago, was honoured for the subsequent spectacular sales growth of the product. Repositioned as the ‘thinking person’s cuppa’, Clipper not only extended its reach from one to 23 markets, it also reversed the decline in its tea sales, with estimated growth of 373 per cent over four years. Moreover, the brand took an ethically commendable stance for reinvesting in fair trade tea growing estates. This investment has helped to fund housing, school facilities and healthcare projects.

The international export award – for the most effective piece of branding for an overseas client by a UK design group – went to Wolff Olins for its Vivo mobile phone identity. Submitted in the over £100 000 category and created for the merger between Portugal Telecom and Telefonica in Brazil, Vivo’s launch saw the business gain 1 million customers in two months. Staff productivity increased by 20 per cent and Vivo was voted a best employer in Brazil.

Winner of the best identity under £100 000 was Creative Leap for its Almus brand, designed for Alliance Unichem and OTC Direct. The newly launched brand outperformed its sales target of £10m by 300 per cent and sales of more than £50m are anticipated by the end of 2004.

Smallfry won the title of best consumer product design with its redesign of a travel fan for Marks & Spencer. The group’s product achieved an average sales volume increase of 105 per cent relative to the retailer’s previous design. The development costs of the product were recouped within 12 weeks and a second set of tooling was needed to keep pace with demand.

Kinneir Dufort Design from Bristol won the best industrial product design category with its specialist Drytec technetium generator for hospitals. The product creates radioactive solutions that are injected into the body during gamma camera imaging procedures. Kinneir Dufort’s design is seeing sales 17 per cent above forecast and has contributed to an increase in factory output of 80 per cent. The design also contributed to an increase in GE Healthcare’s margins of 24 per cent.

MoreySmith won the best office interiors prize for its EMI Group headquarters. The new building, which houses staff from four of EMI’s former offices, proved to be a substantial cost saver for the music group, as well as improving working conditions with a bright, technologically progressive workplace featuring flexible, open space.

London design consultancy Creator scooped the top consumer print award. Its work on Transport for London’s bus service change leaflets were created to stringent cost reduction instructions: the six-page leaflet needed to reduce print costs by 20 per cent. The winning work was not only more manageable for the readers, with 65 per cent of passengers reporting improved legibility, but it also reduced TfL’s costs by £225 000 per year, a saving of 26 per cent.

The winning business-to-business print project was Radley Yeldar’s campaign for McNaughton Paper. The client was seeking a way to promote Colorit, its range of uncoated papers. The design group’s idea for a children’s-style imaginary planet called Coloritland, inhabited by paper characters named after different papers, boosted sales by 50 per cent over the monthly average. The company’s profits also grew by 38 per cent as a result of the campaign.

Other winners included Pearlfisher for its Waitrose own-brand packaging, Nucleus for the Orient-Express Hotels consumer website, Syzygy for the Daimler Chrysler intranet, Alloy for its design management initiative with Sun Corp Technologies and Aricot Vert for Stockley Academy, in the Design for Good category.

Will similar advertising in US give Apple the pip?