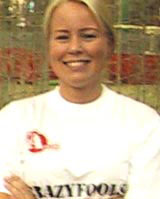 Not only are women increasingly imposing their mark on the design industry, but now also on the former exclusively male arena, the football pitch.

Obviously not content to merely go along and support her male colleagues at this year’s Network Design Recruitment Shield event at Spitalfields, one female footballer took up the challenge and startled fellow players with a dazzling array of skills.

CGI account manager Linda Norberg, who used to play semi-professionally for a second division Swedish ladies team, took the tournament by storm in her first match, when she beat three players from opposing team Interbrand Newell and Sorrell, before back-flicking the ball into the net.

However, encroachment into the area meant that the goal was disallowed.

Inspired by Norberg, CGI went on to win the game 2-0, but subsequently lost and drew its next two matches.