A new exhibition of the work of architect Sir David Adjaye OBE at the Design Museum has set out to explore the role of monuments and memorials in society today.

The show, called David Adjaye: Making Memory, looks into the changing faces of monuments, from static statues to “dynamic” spaces or experiences with multiple narratives and different ways for people to engage with them.

The show focuses on seven projects by the architect’s practice, Adjaye Associates including the Smithsonian National Museum of African American History and Culture in Washington D.C, the National Cathedral of Ghana in Accra and the UK Holocaust Memorial and Learning Centre in London.

It also looks at the Gwangju River Reading Room in South Korea, the Sclera Pavilion which was created for the London Design Festival in 2008, the Mass Extinction Memorial Observatory currently being created on the Isle of Portland and the Coretta Scott King and Martin Luther King Jr. Memorial, which will be in Boston. The projects, which were chosen by Adjaye, are set out across several rooms.

The projects show how varied monuments can be, ranging from South Korea’s pavilion filled with books about protest and ideas around democracy, to the Isle of Portland’s upcoming series of carvings commemorating extinct animal species, which will be completed with a bell that will toll whenever a species becomes extinct.

Adjaye says he hopes the exhibition will spark discussion and urge people to question “what constitutes a monument memorial at the beginning of the 21st century”.

Looking to the future, he thinks there will be “a great emphasis on the ritual” around monuments, with people visiting whenever they want to engage with it in their own way, rather than visiting solely for “formal remembrance”.

Rather than there being one set narrative around a monument, he feels that multiple and perhaps “conflicting narratives” can be represented in one space.

Alex Newson, senior curator at the Design Museum says the show is part of a programme at the museum responding to contemporary design practice.

“We give practising designers a platform to think in public,” he says. “It’s important that we show the issues that designers are challenged with today and how they respond to them. We give them a pretty open [exhibition] brief.”

Newson says this broad brief involved the museum’s curatorial team contacting Adjaye and expressing interest in doing a show with him, then simply asking him what he was currently thinking about. Adjaye then replied with the idea of the monument.

He believes Adjaye’s response to the brief came “partly because he was working on the UK Holocaust Memorial and Learning Centre, but [monuments and memorials] are also a recurring theme in his work.”

He adds that while the architect’s work may not have an “obvious aesthetic” that defines it, he does have “sensitivity” when it comes to designing buildings and places.

“He has a process that analyses the context, people, place, meaning and memory behind the project, I think especially with his monuments and memorials,” Newson says. “They all in some way allow for people to bring their own context to them.

“He said to me earlier that he likes to find a compelling reason to make a form and that kind of process is apparent in all of them,” he adds.

The chosen projects aim to encompass a wide variety of work in terms of size, geographical location and stage of development.

Adjaye tells Design Week: “I always think an architect has this crazy job of looking down two bottles with two eyes — at once, serving a client and dealing with a brief, but also being responsible to society and the history of architecture.

“There is a duality that is always really important to remember as an architect because it keeps you in check.”

The exhibition contains original segments of real-life buildings, alongside replicas — for example, it features a carving that will be in the Mass Extinction Memorial Observatory.

The show also contains a totemic model of each project, a video interview with Adjaye, imagery and videos projected on walls, architectural sketches, and “inspirational objects” that influenced his work.

For example, the room containing the National Cathedral of Ghana exhibit is filled with brightly-coloured Asante umbrellas on the ceiling, as these inspired the roof of the cathedral, which resembles a canopy. The Asante people are an ethnic group from the Asante region of modern-day Ghana.

Newson says: “They are the ceremonial umbrellas that the different [Asante] clans have for their various ceremonies throughout the year.

“In a way, it’s a symbol of the elite, something that the ruling class used to shelter themselves. David [Adjaye] has taken that […] and democratised it for the whole nation to be sheltered by.”

Other highlights include a replica of the bookshelf at the Gwangju River Reading Room, filled with a selection of books, and a lifesize version of a piece of the wooden Sclera Pavilion, which has been installed on the ceiling in one room.

Atmospheric music, which has been composed by Adjaye’s brother Peter Adjaye for the show, fills the exhibition, with pieces changing from room to room but “blending” into one another.

When it comes to creating an architecture exhibition, Newson says it can be “very difficult” to translate architectural work to an exhibition environment, as “you are creating a representation of a thing as opposed to the thing itself”.

“What we didn’t want was a show that was made by an architect, for architects, as some shows are,” he adds.

Keen to present the displays in an “accessible way”, he says the show focuses more on the “context”, “emotion” and “memories” around each project, rather than just the buildings.

Each room contains contextual images or written stories explaining the backgrounds to projects, and giving reasons as to “why the building is necessary”.

Walls within the space are painted in a palette of grey shades, with elements on the walls such as text panels printed on textured grey paper “to add a sense of tonal depth, and draw visitors in,” according to APFEL. 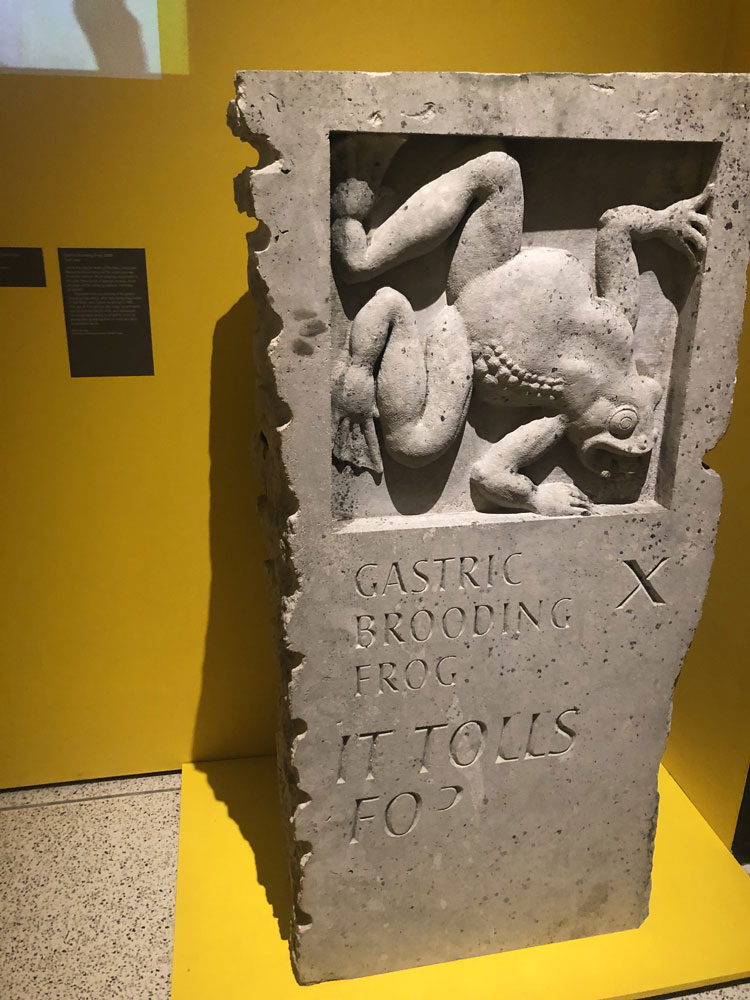 The final room is painted a bright yellow, “to offer visitors a sense of contemporary optimism and lightness at the exhibition’s end,” the studio says.

APFEL has also designed a bespoke title typeface used throughout the exhibition known as Monuments, which is a “fine, Clarendon-style slab serif, based on examples of carved lettering found on and within monuments from [history]”.

Titles made from lettering cut from perspex are placed high on walls “to highlight the grand atmosphere of the rooms within the exhibition,” it adds.

All the different elements within the show aim to create a sense of “immersion”, according to Newson.

“It is about engaging as many of our senses and emotions as possible,” he says. “We have tried to give people a sense of what it is like to be in those buildings.” 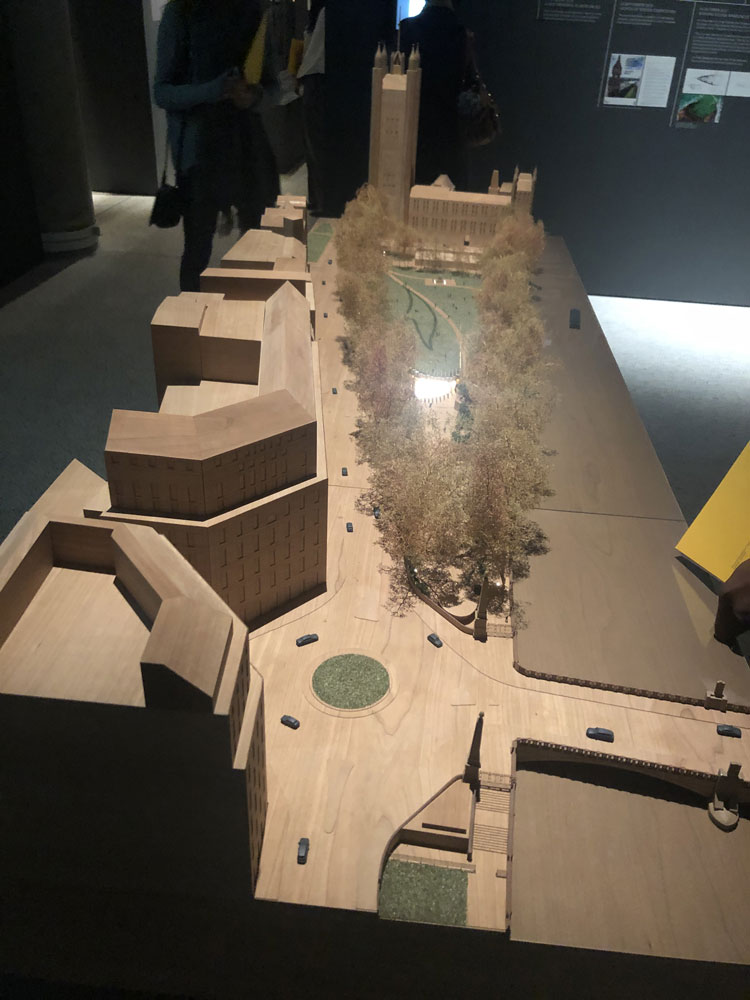 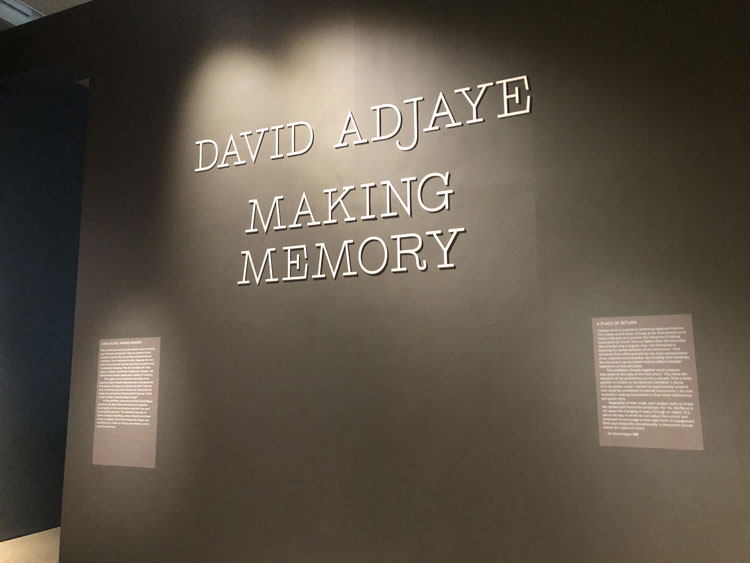