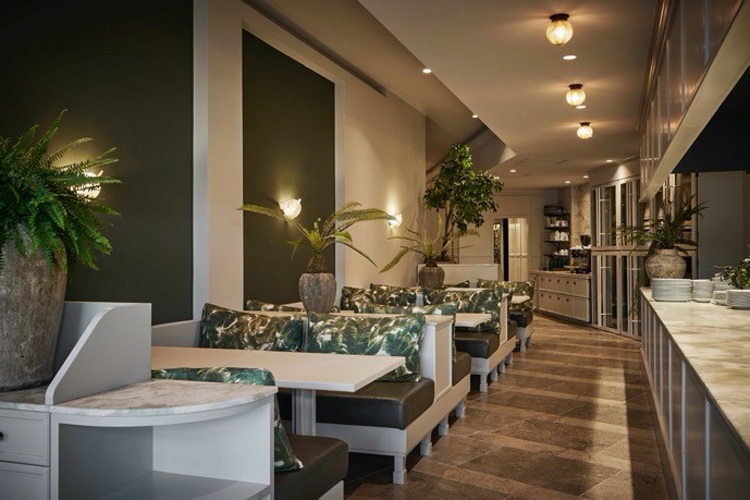 To the left of the main entrance is the restaurant bar, which has been finished in a high-gloss, hand-painted deep plum colour. The texture and finish of the bar is a reference to the front doors of traditional Copenhagen homes, the studio says. A natural stone countertop sits atop.

In contrast to the dark burgundy colour palette of the bar, the inner restaurant features a neutral colour scheme. And where the bar is well-lit with large windows, light is filtered in the restaurant area to create a more intimate space, the studio says.

The main dining area features original columns, which are used to divide the space and draw the eye upwards. According to the Space Copenhagen, this creates a sense of height for the room, and wall-mounted mirrors offer a similar effect. Finally, the dining room gives way to a courtyard and outdoor dining area surrounded by trees. This features a u-shaped bench seating arrangement in a cumaru hardwood, which the studio says will patinate over time. 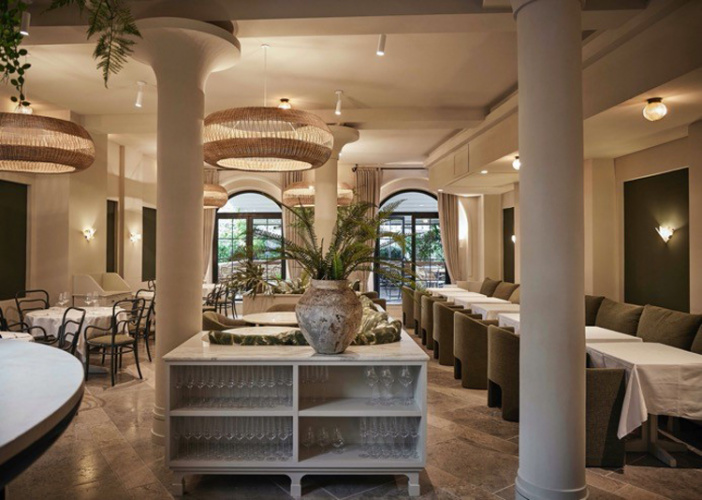 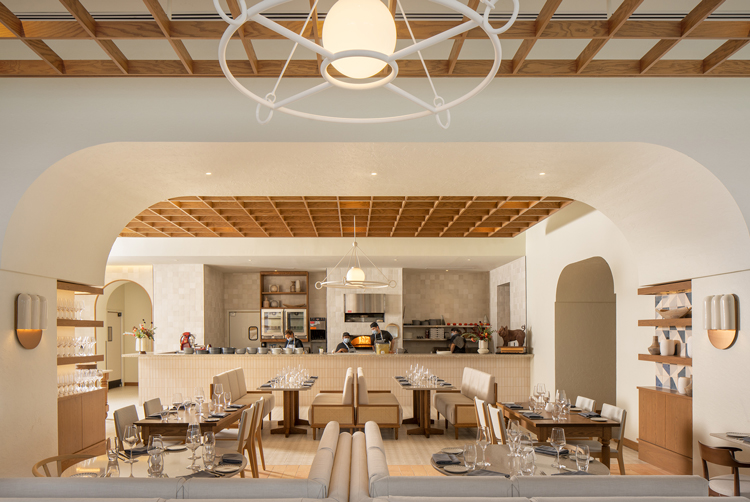 Primo is the newest restaurant from award-winning chef Melissa Kelly, and the 215-seat dining space has been designed by interiors studio Dutch East Design. The inspiration for the restaurant, the studio says, is Chef Kelly’s native Puglia and as such aims to recreate the archetypal Italian courtyard through materials and textures.

In keeping with the chef’s belief that we are “stewards of the land”, the space is interconnected with nature. Greenery punctuates the indoor space, and overflows in the connected courtyard. In contrast to the neutral tones found indoors, the outdoor space is finished in a deep sea blue as a counterpoint.

The use of archways throughout the space helps to create a series of “dining salons” within the restaurant, all framed with their own arch. Each is then finished with custom designed lighting, seating and screens. 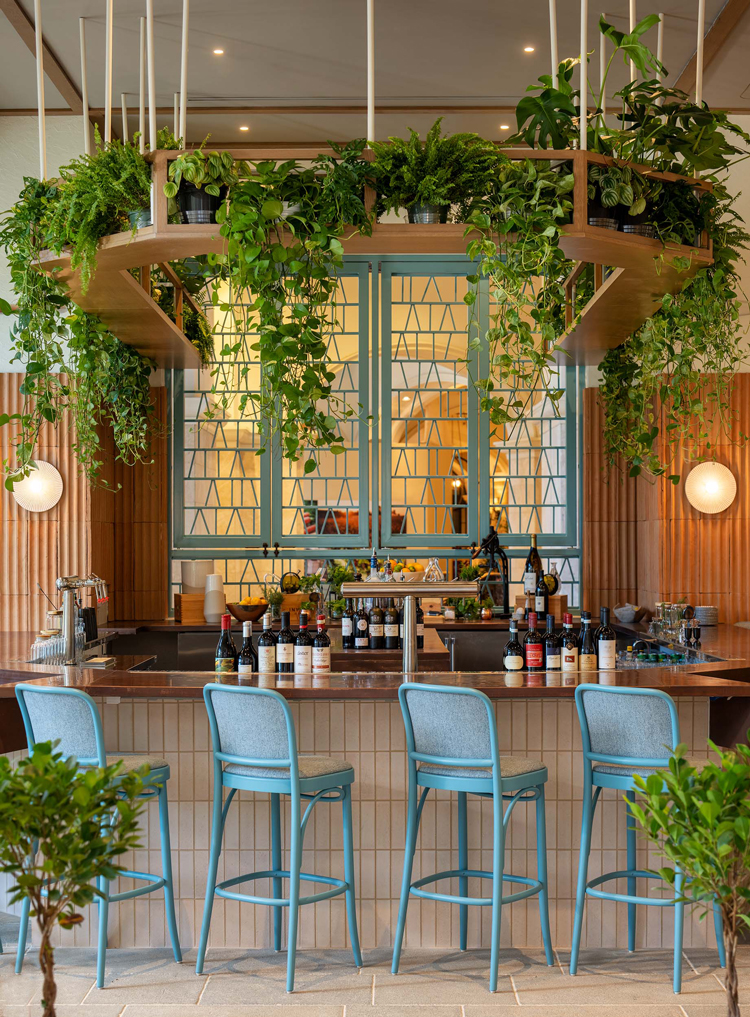 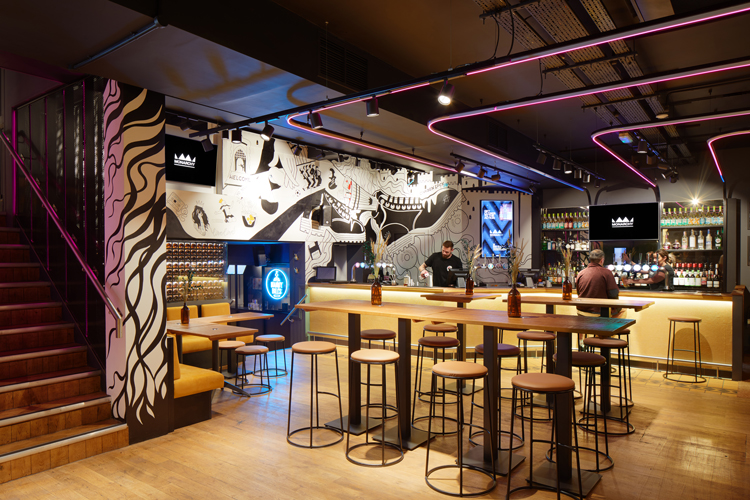 YourStudio’s latest project was a challenge to “reshape the future of the pub” according to the London, Amsterdam and Melbourne-based designers. Operating in a post-pandemic world, owners of the Monarch Pub in Camden wanted its venue to become “an innovation platform where friends want to meet”.

While Monarchy is a physical venue, it is embedded with digital touchpoints. The result is a “truly omni-channel” experience, YourStudio says. The digital elements enhance the physical experience, with examples like an online ordering system, animated digital signage for beer taps and programmable LED lighting. “The space is now a flexible, tech-enabled event and broadcast space,” the studio explains.

Beyond the digital elements, the interior has been based on traditional brewery aesthetics – the studio describes it as “industrial but refined”. The palette features a lot of contrasting colours, and embraces patterns and “statement messaging”, YourStudio says.

A focal point of the space is a large mural designed and painted by London-based illustrator Kate Philipson. Featuring the “Monarchy Manifesto”, it depicts a tattooed woman alongside memories of gigs, games and sporting events, against a backdrop of Camden Lock. 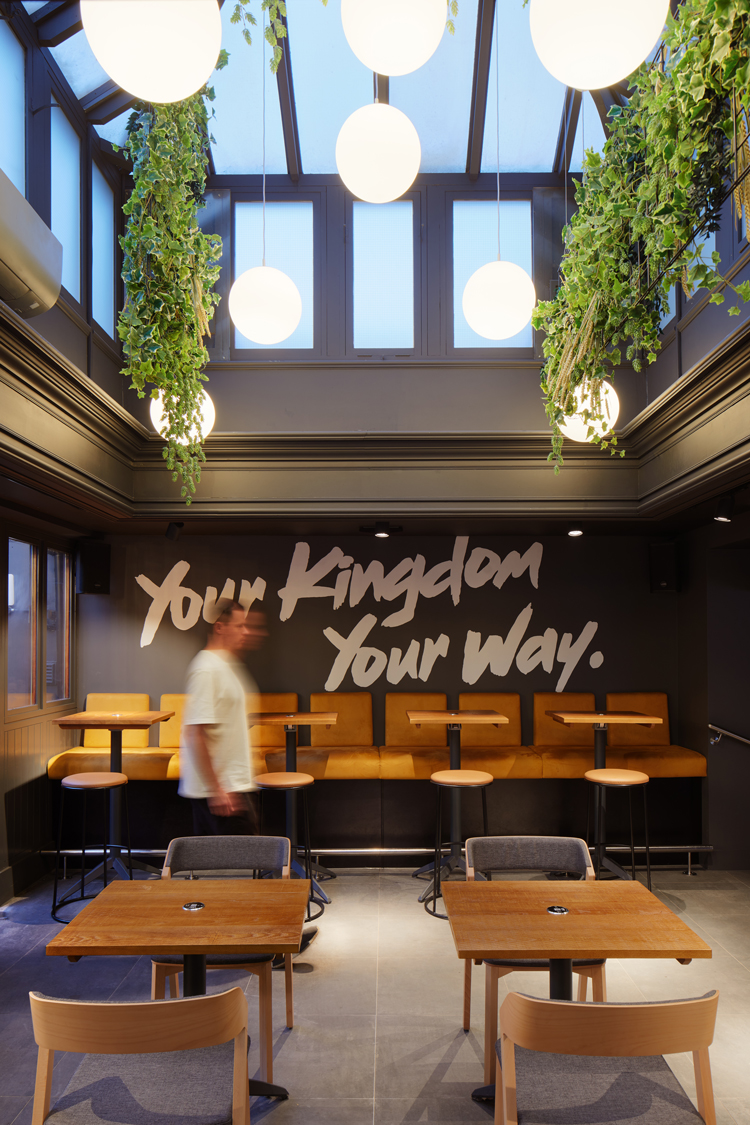 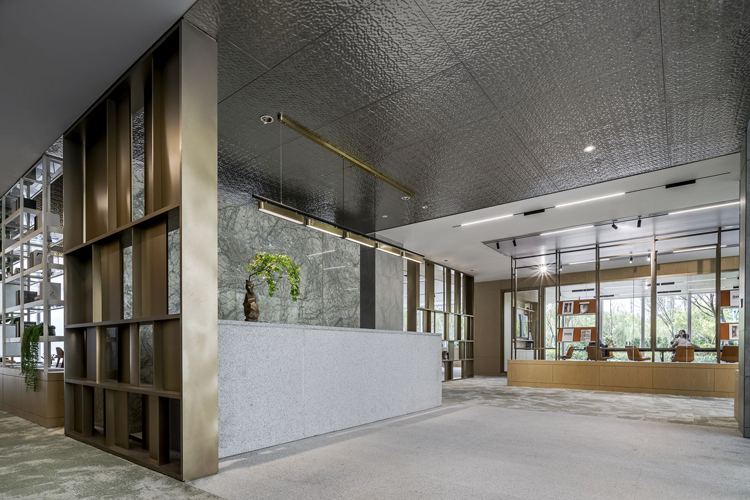 The new research centre for KWG Biovalley will be a space dedicated to pioneering medical technologies and traditional Chinese medicine alike. These two very different areas of study have informed the interior design of the space, which has been developed by SSH studio, and uses a series of contrasts between tech and tradition to mark the difference.

According to SHH, the brief was to create a series of lobbies, contemporary work areas, executive meeting rooms and workspaces across the centre’s five tower buildings. The interiors are inspired by the Five Elements theory of traditional Chinese medicine: water, wood, fire, earth and metal.

The lobby and lift areas of the centre are bright and minimal, with granite tiled flooring and natural stone lined walls. This is complimented with discreet green touches. The area features a dramatic contrast between light stone and dark bronze panels, which wrap the walls and ceiling.

Meanwhile the reception, lounge and open plan office spaces are designed to flow into each other while also providing their own distinct “zones” the studio says. Full-height metal screens and open shelving are used to create space divisions that are still permeable. 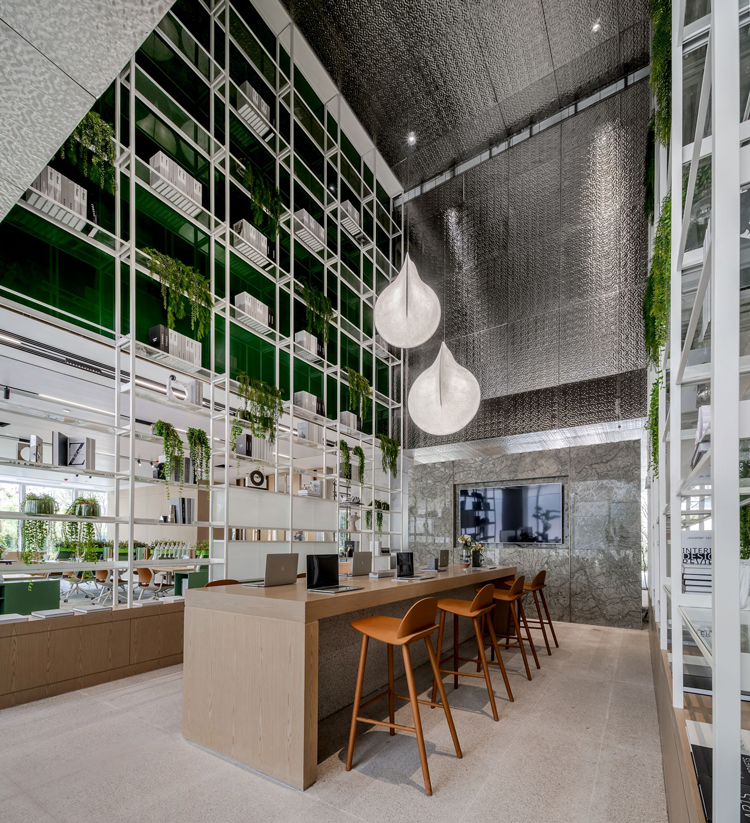 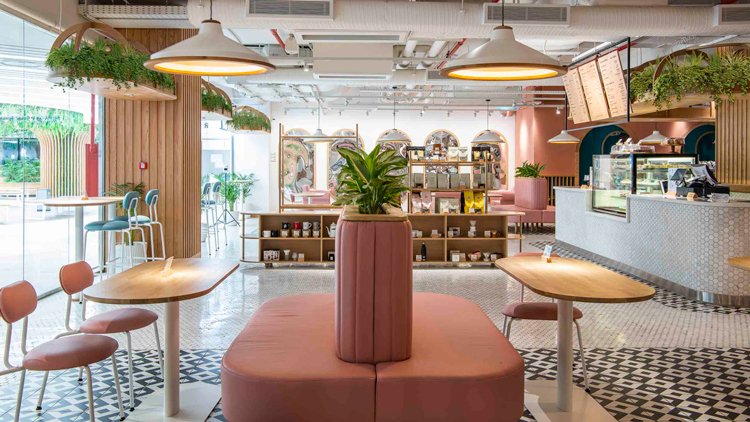 Inspired by Miami’s Art Deco stylings, Liqui’s coffee shop design for Brew92 mixes warm pinks and vivid blues, akin to the city’s beachfront hotels. Further nods to the art movement come in the form of clean lines, geometric shapes and curving forms, all of which Liqui says are synonymous with the Art Deco period.

The shop itself is set over two floors, linked by a bespoke spiral staircase. Each floor has its own coffee counter and a variety of seating arrangements. On the lower floor, intimate “sitting rooms” are available to sit in – access via open archways. To ensure this area remains light, oval-shaped reflective panels are used.

Outside the café sits an al fresco dining area, surrounded by a low metal railing. This encloses the tiled terrace. Liqui says the inclusion of greenery throughout the outdoor space is supposed to evoke the feeling the area is an “oasis”.

To accompany the design work, the studio has developed a series of bespoke furniture pieces and lighting elements. Many are from ranges used in other branches of the coffee chain. The overall effect, Liqui says, is an appearance “synonymous with the brand’s DNA”. 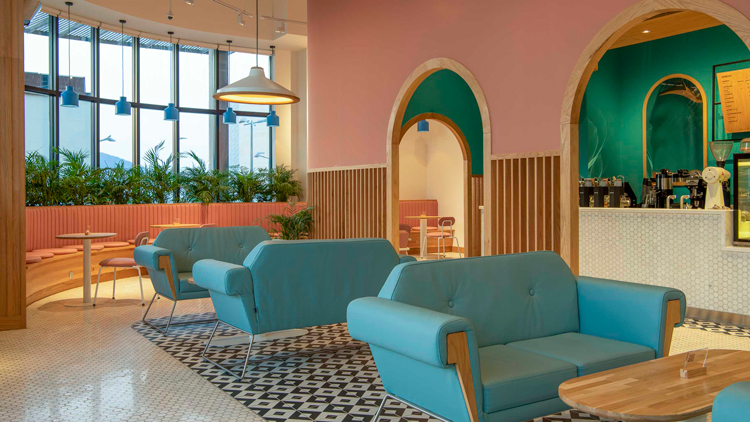 Have you worked on an impressive interiors project recently? Send us details to molly.long@xeim.com.