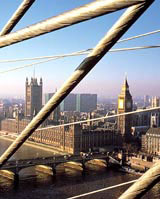 I believe London to be the most creative city in the world – the creative capital of the world. And I think we should celebrate London’s creativity and promote it as a key asset and characteristic of Britain’s identity with an annual event – the London Design Festival.

Over my 38 years in the design industry I have had plenty of opportunity to see London’s creativity blossom, and I have been able to compare it to cities all over the world.

I have never encountered a more inspirational place than London. From its Patent Office have come designs and inventions that have literally changed the world. Seventy per cent of the world’s most significant inventions and one fifth of all post-war inventions were created in Britain; the train, the telephone, the television, the computer, penicillin, the World Wide Web, to name but a few.

London is a highly creative city in business, and as a result it is Europe’s principal business centre – the most successful at attracting overseas companies. As well as housing the largest stock exchange in the world, it now deals with 32 per cent of global turnover, more than New York and Tokyo combined. Our strength in finance is world-renowned, unlike our strength in creativity, which is barely recognised.

Our creative industries are a key motor of regeneration as shown in a recent report by the London Development Partnership, called Creative Energy. They generate some £16-20bn for London’s economy and employ 12 per cent of the capital’s working population. The Government predicts they will be the fastest growing source of new jobs over the next five years.

Who can doubt our creative talent, in London and throughout the UK? Our film, television, radio and theatre are among the best in the world. The same is true for the arts.

And we continue to push scientific boundaries, with breakthroughs like fibre-optics and Dolly the sheep, which made headlines round the world. Earlier this month another headline in the Financial Times explained why Nissan had picked London for its design base.

In the piece the president of Nissan Design Europe, Shiro Nakamura, said, ‘We chose London for its vibrancy and multiculturalism, as well as its strength in all art mediums, including fashion, art, architecture and design.’ He’s right, of course, especially about our design skills.

The UK’s design industry as a whole has reached a maturity, size and level of skill unsurpassed anywhere in the world.

Some 75 000 people work in it full-time, with another million indirectly involved. Together they turn over £6.5bn. World-class design is generated across 25 disciplines throughout the UK including fashion, architecture, graphics, product, new media, retail design and engineering.

The Design Council’s Millennium Products initiative identified over 1000 examples of innovation and great design generated in the last five years of the old millennium, which have now become a worldwide exhibition attraction.

Our design education is widely considered the best in the world, and our design colleges enjoy enormous reputations overseas. More than a third of Europe’s 30 000 design graduates come from the UK system. In fact, another main reason why Nissan is so excited about the talent here is the acclaimed automotive design course run at the Royal College of Art.

Which other city can boast so many major design organisations, including the Design Council, the Design Museum, British Design & Art Direction, the Design Business Association, the Royal Society of Arts and the Chartered Society of Designers? Designers come to work in London, and design teams set up here, because it is the place to be.

Last month listings magazine Time Out told of five European musicians, producers and designers who have relocated to London. Roland Mouret, the fashion designer, said that going to London was ‘Like the Mayflower’. It was his freedom, he said. ‘Every young person who doesn’t feel right in their own country comes to London,’ he added, ‘because they can express themselves here.’

To me, London is undoubtedly the most inspiring, stimulating, creative city in all the world. I believe it’s time we celebrated and promoted our creativity.

A major international design festival would be an inspiration to ourselves, a boost to our overseas image and a major business opportunity. It would put the spotlight on London as a creative city in a creative island and become the focal point for creative thinking.

The London Design Festival is an event waiting to happen. Let’s make it happen.

John Sorrell is co-founder of proactive charity The Sorrell Foundation