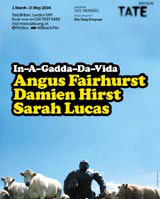 Featuring a mix of new and recent work by British artists Damien Hirst, Sarah Lucas and Angus Fairhurst, the show uses the biblical story of the Garden of Eden as a springboard to explore themes of human existence.

Tate design manager Jane Scherbaum says Rose was tasked with creating a graphic logo that reflected the spirit of the show’s title, which is borrowed from a track by 1960s psychedelic rock band Iron Butterfly and is a distortion of the words ‘in the Garden of Eden’.

She says this is the first time the Tate has opted to use a graphic logo rendered in anything other than its Wolff Olins-designed typeface for an exhibition.

‘This is a unique collaboration of three of Britain’s best-known contemporary artists, so it seemed appropriate. But also, we wanted to evoke a 1960s, psychedelic, rock feeling [for the exhibition],’ she says.

According to Rose creative director Simon Elliott, the ‘garish, synthetic yellow and black’ logotype draws on music references and packaging from the 1960s and 1970s, including the Top of the Pops logo.

The ‘Darwinian intrusion’ of Fairhurst’s bronze gorilla into an ‘almost biblical shot of cows in pasture’, makes it a ‘perfect metaphor for contemporary, ruined paradise’, Elliott explains.

The London group won the appointment, worth a five-figure fee, in September on the back of its previous work for Tate.