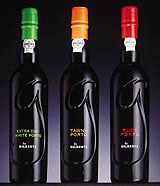 Wren & Rowe has created a global port brand, called G, which is designed to attract the young ‘wine bar crowd’ to the long-maligned drink.

The £40 000 project is part of the consultancy’s long-term work with the food and wine division of the Portuguese conglomerate Amorim. G launches worldwide in two weeks.

The popularity of wine is growing fast compared with beer or spirits, says Wren & Rowe managing director Paul Foulkes-Arellano. ‘We are hoping to convert 20to 30-something red wine drinkers to G,’ he says.

‘G’ derives from the Gilberts brand name, the holding company bought by Amorim that manufactures the drink. Gilberts will appear on the bottle until the ‘G’ brand becomes strong enough in its own right, says Foulkes-Arellano.

‘People think they don’t like port, but they should find it easier to try out the drink if they are given the right product with the right image,’ he adds.

G will be stocked by upmarket retailers such as London’s Fortnum & Mason department store, as well as the London restaurant and hotel trade, before being rolled out more widely to the mass market.

It is the first packaging job Wren & Rowe has completed for the client. The group has already created a £100 000 corporate identity for Amorim-owned drinks company, Burmester, and has two years remaining on the account.

The next project for Amorim will be ‘natural, organic food products’, designed to tempt consumers away from processed ready meals, says Foulkes-Arellano.

Wren & Rowe won the entire project after a proposals pitch against Blackburn’s and Claessens about 15 months ago.