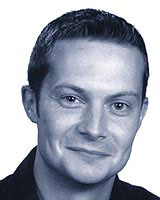 When Deepgroup chief executive Gary Lockton called in the liquidators last week, it signalled more than the end of another digital sector business. The final act, which sent shockwaves round the design world, would seal the fate of a remarkable group of designers. Deepend, as they were generically referred to, was never ordinary. And like the beginning and the middle of their story, it seems the end needed to be prolific.

We have become used to debating aftermaths these past few weeks. In the days that follow this latest event, Deepend’s legacy will be scrutinised closer then ever before. There are some long-running questions. For such a legacy not to have been rescued in some shape or form might appear irregular, even unnecessary to the conventionally minded. But conventionality and regularity are not words this business embraced.

‘We could have gone to a venture capitalist, but that’s killing the goose that laid the golden egg,’ says Lockton. ‘This was never just a business, this was personal.’

Eighteen months ago Gaz (Lockton), David ‘Gravy’ Streek and Simon Waterfall turned down an offer for almost £25m. It would have made the three founders (and principal shareholders) multi-millionaires. But Lockton insists he does not have a shred of regret in this respect.

‘We couldn’t have watched the six-year-old baby we had brought into the world being taken away from us and changed beyond all recognition,’ he says. ‘That’s not why we were in it in the first place and never will be.’

He explains that, more recently, rescue plans with two marketing services networks (one British, one French) were on the table, which would have seen about a third of the business acquired plus the introduction of share options to a good proportion of the team. But in a dramatic turnaround on Monday, both offers were withdrawn at the eleventh hour. Lockton says both groups cited uncertainty after the World Trade Center attacks as a factor. After taking advice from accountant Ernst & Young, with which the group had been in close contact in the final days, the decision was taken to wind things up.

Lockton took advice on whether to take the administration or liquidation route and says administration was avoided because it would probably have prolonged the agony for an extra 12 months.

‘We could have gone the administration route, but the timescales would have been too long – taking a year to 18 months to manage the business back,’ he says.

The three founders all gave personal guarantees to the bank some time ago, but, having chosen liquidation, Lockton expects it will be three or four months before they know if they will be affected.

Some will criticise the business practices of Deepend, perhaps argue that it expanded too quickly and spread itself too thinly. Lockton expects it from some quarters and heard it so many times while at the helm – but all this misses the point, he contests.

‘I am fearful of the fact that others will think we have done wrong by our people, but the team always came first. They may say that the way Deepend was run was the cause of the problem, but that’s absolutely not the case,’ he says.

Lockton attributes the achievements of the group to the simple belief of doing things differently – inverting the model, so to speak.

‘It was run as an upside down venture all the way through. We didn’t say to the designers you must design this project, like most consultancies do. But we asked them what they wanted to design, then went out and looked for the business,’ he explains.

‘Take the range of salaries at Deepend. If you go to an ad agency the differential between the most junior and most senior members of the team can be 150 times. At Deepend it was about four or five times – we had a flat and informal structure and it wouldn’t have worked any other way. The fact that we only lost 25 out of 280 people in seven years speaks for itself,’ he says.

He despises the depersonalisation that traditional business speak has brought about, citing words like ‘management’ and ‘staff’ as prime offenders.

‘We created an environment – not even a culture, you can’t create a culture – around a set of beliefs and let it go,’ he says.

The differences, the unconventionalities, these were what made Deepend the unique operation that it was. People were paid less than at other groups – some took pay cuts to join. No other way could have worked, he stresses.

If there is an up side to all this going forward, it could be the groups that will be spawned directly and indirectly from Deepend. Lockton knows of two already – De-construct (formed by Fred Flade) and one other that he hopes will employ 15-20 people. And Lockton announced he is taking the role of chief executive at North Creative, a one-year-old print and multimedia promotions company in the film and leisure sector.

‘My biggest concern is that [Deepend’s liquidation] will put fear into the design industry. But the general malaise is disappearing from the arts sector – the outlook is positive,’ he concludes.

Airtight (Strategic consultancy): In talks about an MBO

Backend (Technology): In sale negotiations with a rival sector player (hopefully no redundancies)

Relish (PR): Sold back to joint venture partner The Whiteoaks Consultancy before liquidation