When Rolls-Royce recently launched a Champagne Chest as part of its Accessories Collection, the move heralded a big departure for the luxury brand as this was the first product from the company not designed to be used exclusively with a Rolls-Royce car.

The luxury Champagne serving set was conceived and designed by Rolls-Royce Bespoke, a team of 25 designers usually responsible for giving Rolls-Royce customers a level of car customisation which is truly one off.

There are some fairly out there examples of what this service extends to, such as a “Gallery” instead of a dashboard, containing a commission by a leading artist – including an opulent example by designer Thorsten Franck – but more commonly it means that colour and trim options are almost limitless on its vehicles. There are 44,000 Rolls-Royce paint options for example and if you don’t like those you can have your own swatch colour matched. 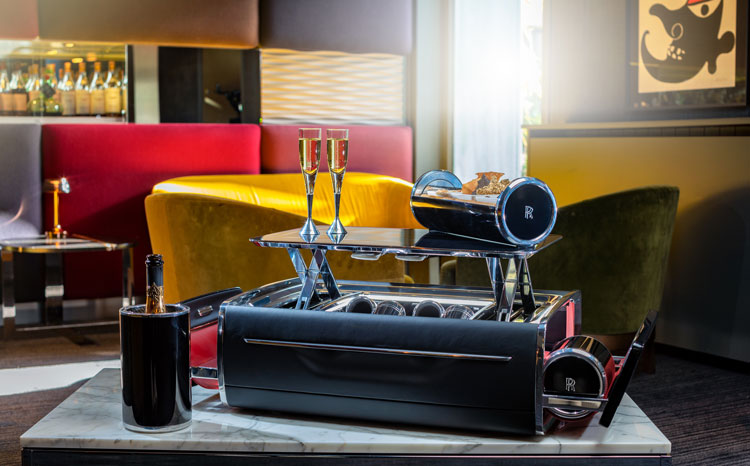 The Champagne Chest is unsurprisingly a feat of engineering, craftsmanship and opulence. It comprises a machined aluminium and carbon fibre body with detailing in Tudor Oak (from forests in the Czech Republic) and leather. When a button is pressed the chest transforms to reveal thermal champagne coolers made from black anodised aluminium and carbon fibre. These are presented in leather “hammocks”. Caviar caissons (water tight chambers), are accommodated and there’s a forensic attention to detail.

Mother-of-Pearl spoons have been chosen so they don’t impair the flavour of the caviar. Their anodised aluminium handles are attached magnetically to the top of the hammock as a storage solution.

Deconstruct the design of any Rolls-Royce car or accessory and you’ll find similarly theatrical stories of craftsmanship, engineering and luxury. What marks the Champagne Chest out is that it pushes the brand away from the automotive world and into the world of high-end luxury, taking its cachet with it. And a £37,000 price tag, in this case.

Rather than being used with the car, out of the boot, the chest is designed to be used on terraces and yacht decks. Although this is an unfathomable idyll for the vast majority of people – more used to patios and deck chairs – it represents a new direction for the brand.

“Are you out to sell things or meet a desire?”

It’s a big step for Rolls Royce, and head of bespoke Gavin Hartley is keen to make the distinction between this kind of product and the “merchandise” that other luxury car manufacturers might endorse as they move away from motoring.

Speaking to Design Week at the launch of the chest Hartley said: “Are you out to sell things or are you out to meet a desire and need? One is done with a whim and the other with a vision. There’s a subtle difference.

“We want to always be focused on our customer, meet their needs and contribute to their lifestyle rather than just put things on shelves.” It is telling how bespoke these products are as he always focuses on the individual, and refers to the customer rather than customers.

When we try to talk with Hartley about production numbers, a Rolls-Royce aide politely interjects with, “We don’t really talk about volumes”. However, we do know that another recent accessory project, a 1920s picnic hamper, designed for use with the cars was a run of 15 and the Champagne Chest will be made to order, but only a small run is expected.

The Champagne chest is distinct from the hamper in terms of its category as the latter is designed to be used with the car. Each car in the range can accommodate a designed-in champagne chiller at the buyers request and it tends to pop out from behind the rear armrest.

In terms of what might follow the chest, although there are “a few cogs turning in people’s heads”, according to Hartley, Rolls-Royce is “not looking at a roll out pattern at the moment” so each new accessory is “seen as an individual solution to a particular context”, rather than a planned range.

This attitude is the philosophy behind all of the bespoke team’s work, most of which is not focussed on accessories but rather the customisation of Rolls-Royce cars, which ensures that practically no two are the same.

“Coach builds are the ultimate expression of the total one-off”

Given that requests come directly from customers Rolls-Royce doesn’t rely on market research. Rather, it fosters close relationships with its customers who ask for particular customisations to their new cars. In the case of the champagne chest, its genesis came from the Rolls-Royce Bespoke team, based on their customer intuition.

“Our main aim is to always create something for the customer but at the Bespoke team we’re delivering specific solutions for individuals – it could be an individual piece or a car for a customer. By focusing of the life and habits and the lifestyle of individuals and designing things to service that, we’re enhancing their lifestyle,” says Hartley.

The job satisfaction that Hartley gets from this is the notion that “by focusing on one customer at a time you get a better feeling of a job well done; I feel like I’ve made that person really happy”.

Bespoke car design is a poetic endeavour for Hartley, who says “coach builds are the ultimate expression of creating a total one-off solution for a customer who wants to depart from the car itself.”

He has run Bespoke at Rolls-Royce since 2005, growing the team to 25 people as demand has increased and now this comprises industrial and product designers, colour and trim designers, materials designers and technical engineers.

“The focus on bespoke has become greater and greater and the numbers needed to service it have naturally grown,” says Hartley, who puts this down to the popularity of the service and adds, “It wasn’t really a planned increase”.

While he is looking at designers for their creative skills and ideas, he’s also keen that they’re of a “similar mindset” to Rolls-Royce staff. “Rather than looking for a certain kind of person, we’re looking for a certain way of thinking,” says Hartley, and this has led him to discovering designers who’ve had very different career paths.

“Some of them have very interesting backgrounds but that’s not necessarily why I’ve selected them,” he adds.

There’s a designer who was on the Finish Olympic ski team for example. “He was an extremely successful ski jumper, but he’s a very good designer as well”.

Others have come from a yacht background or worked in textiles. There are engineers who are trained through the normal degree route or engineers from a very practical background of making things or those who have experience of working with specific materials.

“I don’t have a formula but I’m always looking for contributors to an overall palette of skills,” says Hartley whose own route was a mechanical engineering degree before a car design masters at RCA.

“The engineering degree has really helped me. Naturally I have a technical mindset but I’ve always wanted to have a creative outlet too so in that sense I’ve been torn in two directions, fascinated by the way things work, mechanical challenges and all types of design. I guess I’m looking for that in people.”

“Nobody tells us what to do from a brand perspective”

Whether the bespoke team is working on a car or an accessories product the work is “a judgement call” as Hartley sees it.  “There’s no one telling us what to do from a brand perspective, or which direction we should go in”.

That said Hartley reports into head of design Jozef Kabaň who took on the role in March, joining from BMW (which owns Rolls Royce).  Kabaň’s role has a similar remit to Giles Taylor, who stepped down as design director in June.

Perhaps the apex of the bespoke idea was a one off car, The Sweptail, designed in 2016, for a customer who wanted a two-door coupe car, inspired by 1920s and 1930s cars and yachts. It was designed and built from scratch and has kickstarted Rolls Royce’s Vision Vehicle thinking – an imagined near future where “new technologies” would mean that every Rolls-Royce could be “designed in its owners image”, as the Sweptail was. For now though the Sweptail is the only total one off.

In Rolls Royce’s world of 6 litre V12 combustion engines and a palette of materials which includes Simmental cow leather and Indian teak, it would seem that sustainability is not terribly high on the company’s agenda, although a spokesperson for the company maintains that “materials used in Rolls–Royce Motor Cars production are sourced sustainably”.

According to the spokesperson leather off-cuts from upholstery are re-used in the fashion and footwear industries and off-cuts of wood veneer are donated to a local charity, which uses them to make furniture and other fund-raising products. 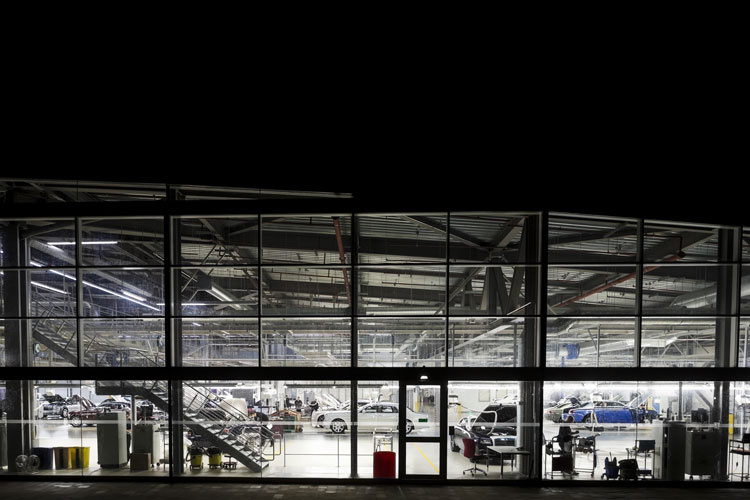 While the Goodwood HQ and manufacturing plant, designed by Sir Nicholas Grimshaw in 2003 was engineered to mitigate environmental impact as much as possible, you won’t find Rolls-Royce talking about cars which aren’t running on fossil fuels.

Every Rolls-Royce that comes off the production line, like any car, has a latent power to damage the environment, but given that the company operates at the peek of luxury, it is dealing in relatively small volumes of everything it produces. Some 20 cars a day are created. 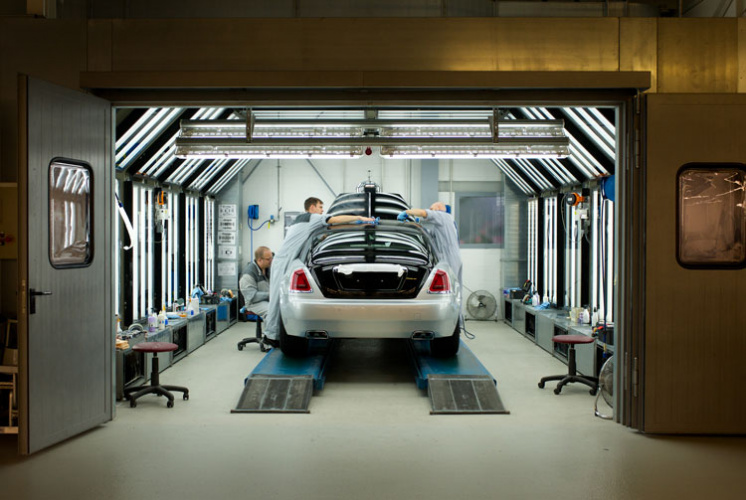 Meanwhile the new factory did see a reduction in energy footprint of 29% per car according to Rolls-Royce and more than 60% of waste including cardboard, paper, plastic, tyres and polystyrene is now recycled.

Although environmental and sustainable arguments may slightly temper the glamour of a brand like Rolls Royce, its attitude to automotive design – and now lifestyle products – is one of totality, in that it thinks everything can be improved.

Hartley puts it best when he recalls a saying by Henry Royce, one of the original founding partners of the company.

“’Take the best that exists and make it better and if it doesn’t exist then design it.’”