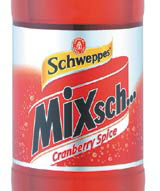 Brewer Riddiford has created the packaging for Schweppes Mixsch, a range of soft drink mixers being launched by Coca Cola Enterprises to capitalise on the growth of white spirits like vodka.

The three-flavour range is scheduled to launch in clubs and bars later this month. The group, which was appointed without a pitch on the strength of previous work for Coca Cola UK, also generated the Mixsch name.

A Coca Cola Enterprises spokeswoman says the firm has identified a decline in flavoured alcoholic beverages, but an increasing demand for ‘white spirits’.

‘Consumers want to expand their drinks repertoire and [are looking for] greater variety [in mixers],’ she says.

Brewer Riddiford managing director George Riddiford says the consultancy was briefed to appeal to a young adult audience with packaging that ‘speaks a spirits language rather than a soft drink language’.

‘Schweppes has a strong heritage in mixers, which needed to be built on, but the desire was for a younger and more dynamic offshoot from the Schweppes brand,’ Riddiford explains.

‘There are both traditional and teenage soft drinks on the market, but nothing for young adults. We’re capitalising on Schweppes’ adult appeal in a funky, interesting way,’ he adds.

Thanks for Shoreditch Twat