Ron Timehin started out as a musician, not a visual artist. While touring the world as a professional trumpeter, he was able to explore many cities and landscapes, which led to him developing an interest in photography as he started taking phone snaps and sharing them on Instagram.

Now a freelance photographer, Timehin looks to combine photography and cinematography to create “weird juxtapositions between different realities”, he says at the Adobe Stock Remix Live event where he showcased his design processes live, resulting in a finished graphic.

“I create double exposure cinemographs, essentially a video file merged with a photo,” he says. “I’m taking a common technique in photography but adding a spin on it to give it a futuristic feel.”

The piece he showcased involved a timelapse video of London Bridge, which he found through Adobe Stock, overlapped over a personal photograph he had taken of a side-profile of his female friend.

The resulting image saw a moving, cityscape image used over his model’s face. A brush tool was used to reduce opacity, and a blurred filter was added, alongside a soft light. The video was shortened and cut in Photoshop, and then duplicated so that it would loop continuously. The final piece is a surreal combination of landscape and portraiture, which could be seen to depict the model’s thoughts very literally.

Day-to-day, Timehin mostly uses photo-editing software Adobe Lightroom CC to quickly edit and share photos he’s taken. But for his design at the Adobe Stock event, he used Adobe Photoshop CC to create a more detailed piece, that saw him play with colour and effects, retouching and adding layers.

Timehin, who describes his work as “dark, moody and beautiful”, started out his career on Instagram and lives by the premise that “anyone can take photos.”

Check out Timehin’s final artwork below:

Freelance graphic designer Kyle Wilkinson dabbles in typography, illustration and even furniture design, and is a big believer that “creative skills are transferable across disciplines”.

Primarily using Photoshop, he creates imagery that combines both synthetic, futuristic elements and more natural ones, alongside type, to create alarming and perplexing imagery.

Having worked for brands such as Mercedes-Benz and Wired magazine, his signature style is to distort and intermingle text and imagery, creating type out of strange textures such as bubbles or multicoloured candy-canes, or by physically submerging letters under water then photographing them.

He focuses on monochrome palettes mostly, adding a splash of colour where appropriate, to get away from stereotypical ideas of surreal imagery, he says.

“There are a lot of examples out there right now that are psychedelic and colourful, so I wanted to tackle the theme of Creative Reality in a slightly different manner,” he says. “My signature thing is to create stripped back things, rather than a lot of colour.”

Presenting his work at the Adobe Stock Remix Live event, he says that he uses the stock image program to search for “juxtaposing” textures and photos, opting for a series of bubbles alongside a bird’s feather for the exercise. He also downloaded a marble texture from the library.

“There’s a juxtaposition between the futuristic, high glossy texture you would see in a science-fiction environment, with the natural bird’s feather,” he says. “I’m trying to create something otherworldly.”

The resulting image is a futuristic birds’ nest filled with marble-textured bubbles, with a pop of colour through the addition of a bright blue butterfly image at the end, created through layering and using multiple masks in Photoshop. He also applies type to show how imagery creation like this could be used in branding or advertising applications.

In terms of what inspires him to create such eclectic imagery, he says that “anything is the key”. “Get out into the world and look up,” he says. “We’re too fixated on our phones. Anything could inspire you, from a leaf to a texture in the road.”

Check out Wilkinson’s final image below: 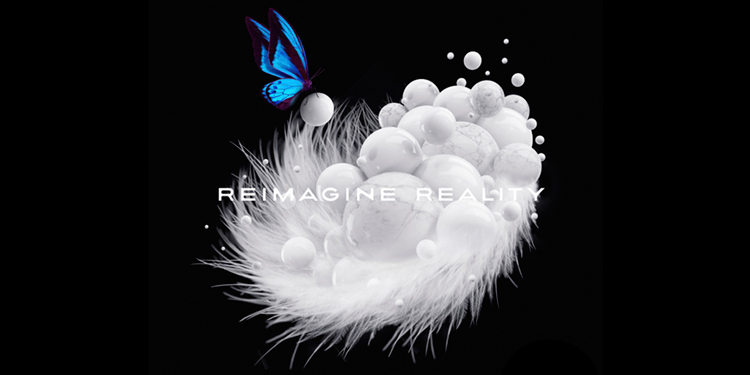 Digital designer and creative director Lucy Hardcastle is one of Design Week’s up-and-coming designers to look out for this year.

Having graduated with a master’s degree in information experience design from the Royal College of Art (RCA) last year, she has since set up her own studio, and has created colourful, animated, three-dimensional (3D) work for brands including Chanel, Levi’s and Channel 4.

As well as producing commercial work, she has her own research studio where she explores the relationship between graphics and physical materials.

“I love making things that are interactive, making something that is a sensorial experience for my audience,” she says at the Adobe Stock event. “I see shapes and colours as a language of themselves. I love looking at virtual space and the relationship we have with technology.”

Searching for backgrounds, textures and imagery in Adobe Stock, she then edited shapes in Adobe Dimension, a program initially intended for packaging and product designers in that you can transform, rotate and look at various viewpoints of 2D images as if they were 3D.

She edits and refines backgrounds and patterns in Photoshop, then opens them in Dimension to use alongside other imagery.

Another feature of Adobe Stock she uses is the visual search tool, which uses artificial intelligence to search for photography that is like an image you upload. For the Adobe Stock Remix Live exercise, she uploaded a photo of some woven, blue textile material she had taken herself to the Adobe Stock search bar and combined this with the search term “microscopic nature”. This produces similar imagery to her photo, while also taking into account the search words.

Her resulting image is a strange, molecular structure, combining both natural and non-natural materials such as steel and cells.

“What I like about my work is that people sometimes can’t tell if it’s real or not,” she says. “I also love finding ways of bringing science into the work that I do.”

Check out Hardcastle’s final image below: 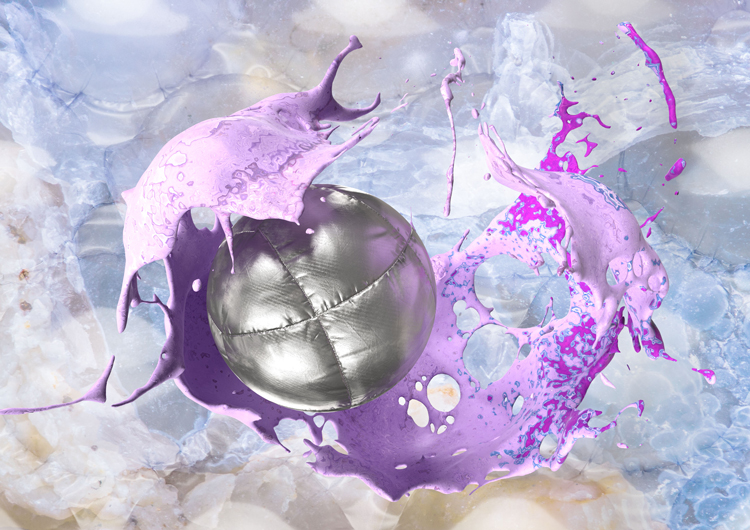 Have a go at making your own remix design, by downloading and using 10 free assets from Adobe Stock.

As part of Adobe’s Creative Reality theme for July and August, the Adobe team also picked out designers and artists from across the world who are taking people away from the real world in different ways – whether this be through creating otherworldly imagery, peaceful soundscapes, virtual reality tools or completely immersive environments combining all these things.

Meow Wolf is a group of designers, architects, painters, sculptors, performers and writers based in Santa Fe, which, for the last 10 years, have creating otherworldly environments that people can get lost in.

Previous projects have included Glitteropolis, a fake, archaeological site based in New Mexico State University, which featured a whole imagined world made of glitter, including villages, obelisks, glyphs and whole settings including forests and mountain scenes.

As well as being visually overwhelming, it also used sound and light to immerse its visitors, taking them to a strange world that was a mix of futuristic themes and historical and archaeological ones.

One of their most recent projects, The House, was a glorified and expanded murder mystery exercise for visitors. Judging by the recent explosion in popularity of fun-filled games such as escape rooms, it is obvious there is an appetite for people to get lost in make-believe stories.

The house, based in Santa Fe, was a Victorian building filled with a series of colourful and chaotic rooms, secret passages, and interactive light and musical objects that could be played with, while guests looked to solve the mysterious disappearance of the fictional Selig family.

According to Meow Wolf, this piece of work, like many others of the group’s, looked to “dissolve the nature of time and space”, combining futuristic and science-fiction elements with heritage and Victorian aesthetic, in a bid to not only provide joy and fun for guests but also take them away from their real-life problems for a few hours.

Immersive tech such as virtual and augmented reality (VR and AR) has been used in new software and tools that enable today’s designers to make and create in a make-believe world.

In its simplest form, AR has been used across smartphone apps such as Pokémon Go to combine real and imaginary settings, bringing play into a real-life environment.

Now, the tech has been developed for productivity as well as fun – Adobe’s latest software ventures, which are currently in development, include Project Dali and Project Aero. Dali is a 3D VR painting tool that lets designers and artists draw in a virtual space around them, and Project Aero is an AR tool that will combine virtual and real-life environments to allow product designers, architects and more to design to scale in a real-world space.

Project Dali will require the use of a VR headset, while Project Aero could be used with a headset or simply through a screen-based device, like a phone or tablet. As well as helping artists and designers create in a more tangible and life-like setting, the tools could also be used by consumers in the future. Using Aero, someone refurnishing their home could try virtual furniture out in their living room before buying, or even visualise a dish from a restaurant menu before choosing what they want to eat.

VR is all about transferring users to another world, while AR enhances the real-world experience – but both are being used to make the act of creativity more intuitive and absorbing.

Adobe Stock offers a highly curated collection of inspiring and visually impactful content sourced from the world’s leading assignment artists, stock artists and agencies – perfect for designers and visual storytellers who are looking for exceptional ways to tell authentic stories.

This diverse marketplace of royalty-free assets is uniquely and natively integrated within Creative Cloud, saving you time and enabling uninterrupted creativity so you can search and license high-quality assets without ever leaving your favourite apps. Stock like only Adobe can. Get 10 free images at: https://adobe.ly/2Aqj71D