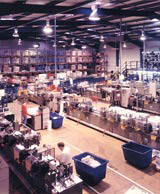 Digital printers are embracing new technologies, and in many cases accepting a high level of risk in their choice of investment. They do this because they are informed about what their customers expect of them. Equally, paper merchants cannot afford to ignore the additional demands that are placed upon them when serving the needs of such an emerging market.

Arjo Wiggins, for example, has relaunched the Conqueror brand, including a special selection of Conqueror finishes re-engineered for specialist digital presses. The papers are all intelligently designed to allow you to be more efficient and productive without sacrificing the quality of your paper. The range includes translucent stocks and a variety of finishes.

When Radley Yelder produced a brochure for Belgian chemical company Solvay, it wanted to create an internal communications change programme to help it build a sense of coherent identity across the group. The 3D images were created and moulded within a presentation pack for managers and contained 3D glasses. Visuals representing the company’s mission, vision and values took on a new look when viewed through these glasses. Each member of staff received a brochure in their native tongue, backed up by an Intranet site.

For the project, digital printer CPD Digital created some guidelines that outline the basics of creating 3D effects. The best base colours to use were blues and reds, so the printer experimented with different screen angles and moving the two base colours around to create a ‘shift’ in ‘depth’ of effect. This was made more difficult by the fact that its digital machine is configured to print in four colours and not special colours, so each colour is tint-laid rather than line work. The Solvay brochure was produced on Royal digital matt 160gsm.

Trickett & Webb chose digital print for a Blackwell Publishing internal communications poster, produced on Replica digital 190gsm. ‘The idea behind the design was to show the company’s conventional and on-line publishing interests and to look ‘hot off the press’ – which it was. Timing was a real problem, with the identity still being developed as the poster went out. The limited production time and the very small quantity meant that digital printing really was the only answer,’ says Trickett & Webb associate director Heidi Lightfoot.

The Partners’ certificate for Peterhouse Perimeter Path Donors was a job with a tight deadline and budget, so digital print proved to be the quickest and most cost-effective way. The specification required a heavy laid stock – Strathmore Pastel Natural White 270gsm, that added to the ‘certificate’ feel of the piece and was sympathetic to the illustrator’s colour palette.

The certificate was used to help the National Advertising Benevolent Society raise funds to build a perimeter path around the Peterhouse Retirement home. In the summer of 2000, senior people working in the media industry were invited to fund a metre or more of the path, at £100 a metre. As a token of their gratitude, Nabs sent each donor a personalised copy of the Benoit Jacques print. The print features an illustration of Peterhouse with the path made up of all the sponsors’ names.

The one area in digital printing that definitely adds value to a design is variable data. An Arjo Wiggins promotion in early December will provide actual printed samples to demonstrate what can be achieved and the possibilities of variable print to stimulate the designer’s imagination.

A number of brochures are being produced digitally in advance of the full litho print run for marketing purposes. With the right attitude and the right equipment anything from a fast turnaround proof to end user production copies of a design can be very successfully produced.

This was done for an annual report that Addison produced digitally for DHL as the final run. It introduced Addison’s standard pre-press litho procedures on the project. There are obviously certain colour limitations with this process, but you should persevere to achieve the best results. Addison used coated 350gsm/ 170gsm Mondial Silk for each of the documents.

When choosing a paper, it is important to consider not only suitability for end usage, but also its suitability and performance for the specific digital process. Most of the large paper companies have set up helpdesks for specifiers and printers. They want to add value to a design so they are constantly looking to develop specialist products and offer the right advice. For us in design, that is essential. m

Liz Grahame is head of print at Addison

Demons in the detail