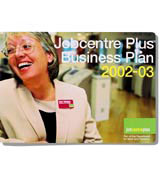 Brahm has designed a ‘vision document’ for the Government’s Jobcentre Plus service. It launches on 2 July as the second stage of a two-step project worth around £40 000 to the consultancy.

The first document, a business plan for 2002-03, launched in April to coincide with the formal amalgamation of the Employment Service and the Benefit Agency under the Jobcentre Plus brand, created by FutureBrand (DW 12 July 2001). The vision document sets out the organisation’s strategy for the next five to ten years, says Brahm account director Thea Mallett.

The brief for both pieces of work was to present Jobcentre Plus as open and approachable, and offering a more focused and individual service. ‘It’s totally breaking away from its previous print work and is far away from the social security image of benefits,’ she adds.

FutureBrand was also responsible for the ‘retail inspired’ interior design concept of the 56 ‘pathfinder’ offices which Jobcentre Plus launched in October 2001.

In March, the then Work and Pensions Secretary Alistair Darling announced plans to roll out a further 225 offices that follow the FutureBrand format over the next 12 months.