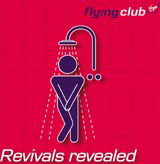 Virgin Atlantic is 18 years’ old this month and head of design Bill Gosbee is gearing up for the party. His remit has recently been extended to include events as well as his core graphic design responsibilities, so he’s been scouting for venues and working on projects to help the airline celebrate.

The airline has grown up. From a start-up operation flying one plane to New York it now flies 24 aircraft to 19 destinations.

Gosbee’s keeping mum on the exact details, but says its birthday celebrations won’t resemble his 18th, which involved ‘getting drunk very quickly and then being ill’.

He is direct – as the above quote shows – deliberate and focused on detail, perhaps not unsurprising attributes for a former semi-professional fencer who represented Britain at three Olympic Games. Gosbee is modest about this achievement, describing fencing as ‘quick chess’ and says the experience has helped put the pressure of working life in perspective.

Gosbee’s career came of age as design manager at Marie Curie Cancer Care where he was responsible for all aspects of design across 150 shops, 40 offices and 12 hospices. He moved from this ‘traditional charity’ to Comic Relief, attracted in part by its brand ethos.

‘Comic Relief is a populist brand. Because of that we were able to work with major consultancies and set design standards,’ he says.

Gosbee sees similarities between Comic Relief and Virgin Atlantic, arguably a populist brand too. Both are perceived as credible and act out their brand values beyond their graphic representation, he says.

He’s an advocate of honesty in brand values, returning to the theme several times, but admits design cannot function in a vacuum. ‘Even great design doesn’t work on its own,’ he says. It reflects the spirit of a company and can help to move it on, but not without support. It works when people believe in it, and when you bridge the gap between design and delivery.

‘Design is sometimes seen as a quick fix solution to paste over a few cracks and sell products. But it needs to be a fundamental part of a brand, both externally and internally. If design doesn’t stack up to delivery, investment in it is wasted,’ Gosbee adds.

At Comic Relief, he was surprised by the effort suppliers and partners were willing to make, from dressing up in silly outfits for presentations to grander stunts such as moored, specially designed boats outside the offices. ‘You only get that type of response through awareness of what the organisation stands for,’ he says.

As part of his focus on ‘living the brand’ and being up-front about values, Gosbee’s criteria for selecting consultancies is unsurprising.

‘The cultural fit between client and consultancy is vital, and in my experience relationships work best if cultures are similar,’ he says.

Although Virgin Atlantic only works with one graphics group, Start Design, Gosbee can see the benefit in employing a roster, enabling both client and consultancies to constantly refresh what they have to offer. This is important to him at Virgin Atlantic, he says, as the company is focused on innovation.

‘The design end of the business has to live up to the company’s spirit of innovation, keep pushing the boundaries and question what’s been done before. It’s also about transmitting the Virgin sense of fun through design,’ he says. This, he adds, takes real attention to detail.

Gosbee is a supporter of in-house teams and has three in-house designers. He says he aims to continue building the reputation of his team within the organisation. In the past, it has pitched successfully against external groups.

He feels criticism of in-house teams often stems from the way they are perceived internally. His view is that some companies pay lip service to in-house teams, but give major projects to consultancies, adding that he continues to motivate and develop the in-house team with challenging projects.

He cites one project as an example of the value an in-house team can add: on-going growth at the airline meant it became necessary to monitor brand values globally and introduce brand guidelines.

In response, the team delivered an internal, on-line resource, the Virgin Atlantic Design Workshop, which illustrates almost every aspect of the airline’s design work and brand guidelines and includes a copy bank and image library.

‘The Virgin brand doesn’t really have a strict corporate identity,’ says Gosbee. ‘We share ideas rather than police the brand. Delivery through humour also gives us flexibility because humour is culturally sensitive. But there has to be consistency because passengers are seeing the product [as they travel] throughout the world,’ he adds.

With Gosbee’s focus on detail and delivery, and Virgin Atlantic’s ‘honesty’ policy, the airline’s coming of age should be a party to look forward to.

DJ Wayne’s talents poised to bring the house down

Pharmacy at Tate Modern in need of medication