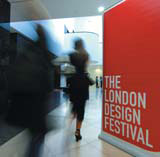 The London Design Festival has yet to secure funding for next year, despite record attendances at this year’s events.

The festival’s main financial backer, the London Development Agency, part of the Greater London Authority run by London mayor Ken Livingstone, is still in ongoing ‘discussions’ with the organisers of the festival regarding future finance. But industry pundits are quietly confident that the LDA will continue its support of the festival, which has been visibly trimming its costs, despite the protracted negotiations.

‘We are currently in the middle of a discussion for the extension of the contract,’ says Graham Hitchen, head of creative industries at the LDA.

The LDA’s three-year contract with the London Design Festival has now come to an end. It has provided financial backing for the event since its start-up in 2003, and even topped up festival funds when supplementary sponsorship did not materialise in years two and three.

According to initial estimates, this year’s London Design Festival attracted at least 200 000 visitors, up from 150 000 last year. Next year’s event is scheduled for 15 to 30 September. William Knight, festival manager, says he anticipates the event will continue to grow ‘organically.’ He would like to create more links with the manufacturing sector in London, build educational initiatives, promote the festival’s international reputation and continue to ‘draw people in from the broadest possible spectrum to engage them with design.’

The World Creative Forum – which did not happen in London this year – will take place next year at a yet-to-be announced international location. Cities in the running include Singapore, Australia and Hong Kong. Initially set up as a centrepiece for the inaugural London Design Festival, the forum was established to attract overseas business people and creatives to London.

Knight also confirms that the London Design Festival will be moving its headquarters out of Kingsway Place, London EC1, which it has been sharing with Frost Design and The Sorrell Foundation. ‘This [new base] will be in the middle of London and we will aim to continue to be open and accessible. We are just beginning the process,’ Knight adds.