That was back in 2012. Eight years later and the beer brand has graduated from these humble beginnings and now operates a bigger brewery in Tottenham while having built significant brand awareness and equity in the craft beer sector.

It has also expanded its offering, which now includes the core range, limited edition brews and its latest Tempus Barrel range. Dwyer has designed the labels and cans for all of them. 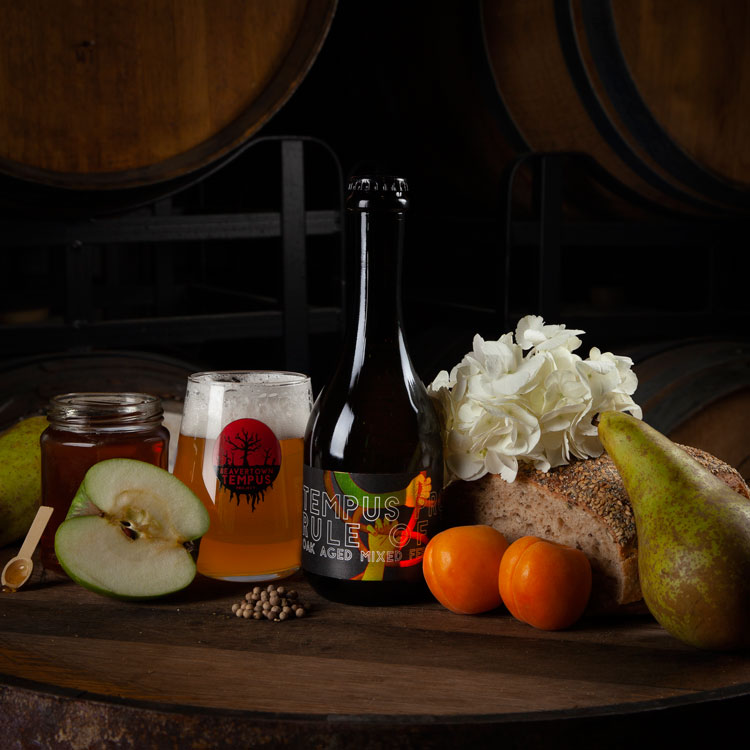 The new Tempus Barrel range, is a bit of a departure from its usual aesthetic. The core Beavertown range and its limited-edition brews feature bright colours and illustrative characters like spacemen and skeletons. The Tempus collection takes a different approach, packaged in a bottle instead of a can and adopting a more “refined” style.

“We wanted the branding for the Tempus range to represent much more accurately what was going on in the bottle – the beers are like magic potions,” Dwyer tells Design Week.

The ingredients of the Tempus beers have more of an “artistic flourish”, Dwyer says, and he had to design the labels for the range accordingly. This, coupled with a brewing schedule that follows the seasons, inspired the team to look to mythology and traditional “druid imagery” for inspiration.

“The process of designing them involved lots of furious scribblings and detail for the sake of making things look pretty,” he says. “The final result is really ornate.” 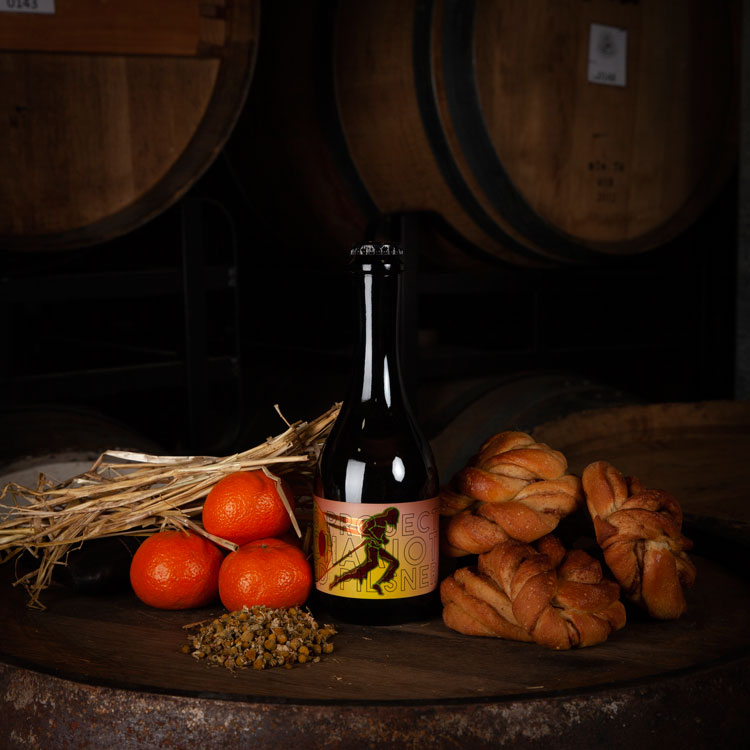 Dwyer likens the Tempus project to an experimental album where the artist is “trying to do something different with every track”. Rather than create designs around a collective theme, the Tempus range is “less cohesive on purpose”, in order to reflect the wide range of flavours on offer.

The starting point for creating each beer’s identity is its name. Beer names are developed and decided on in-house by the Beavertown team – while he is the only designer, he doesn’t think of himself as a one-man band because of the creative input of the rest of the team. Once locked in, Dwyer starts looking for references.

With this new range, as well as the core collection, Dwyer likes to illustrate scenes where a significant portion of the action happens “off camera”. That is, where the interactions between the characters and objects on the labels leave room for the drinker to imagine the rest of the narrative for themselves.

“I don’t like things to be bookended and contained,” he says. “I’d much rather people go home and think about it and interpret it in their own way.” 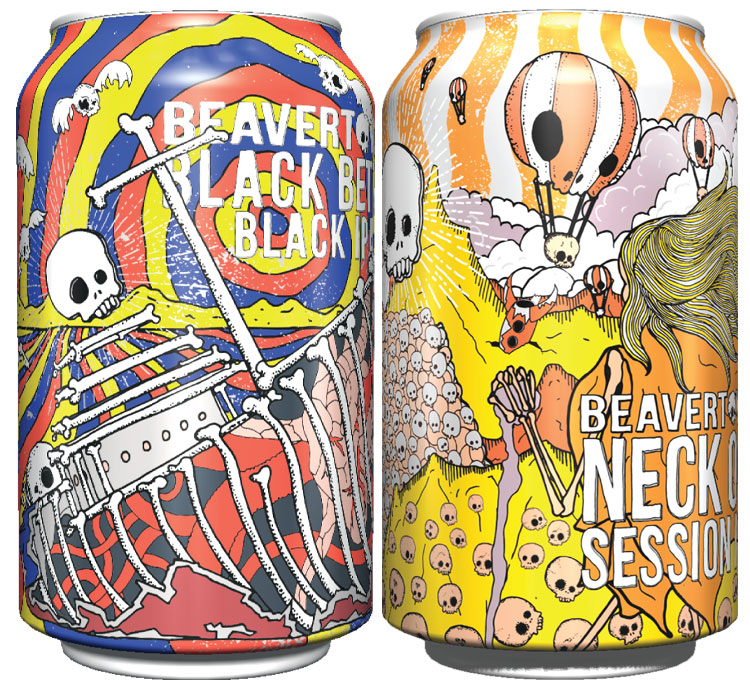 As for the actual content on the labels, Dwyer says the designs for the wider Beavertown range are rooted in popular culture. A lot of the inspirations come from visual references from his childhood – he lists cartoons like The Simpsons, Futurama and toys like Action Man and comics like Dan Dare as examples.

“I didn’t notice for a long time that the Gamma Ray colour palette was influenced by the Thunderbirds, but the can uses all the colours of their uniforms,” says Dwyer. “I think some people think it would be a bit more complicated than it is, but I really just love looking at references that are a bit silly.”

Beyond cartoons, Dwyer says a big inspiration is Aubrey Beardsley, the Victorian-era illustrator who shocked and delighted audiences with his decadent and grotesque style. Beardsley’s influence can be found in both the Tempus range and the core range, he adds. 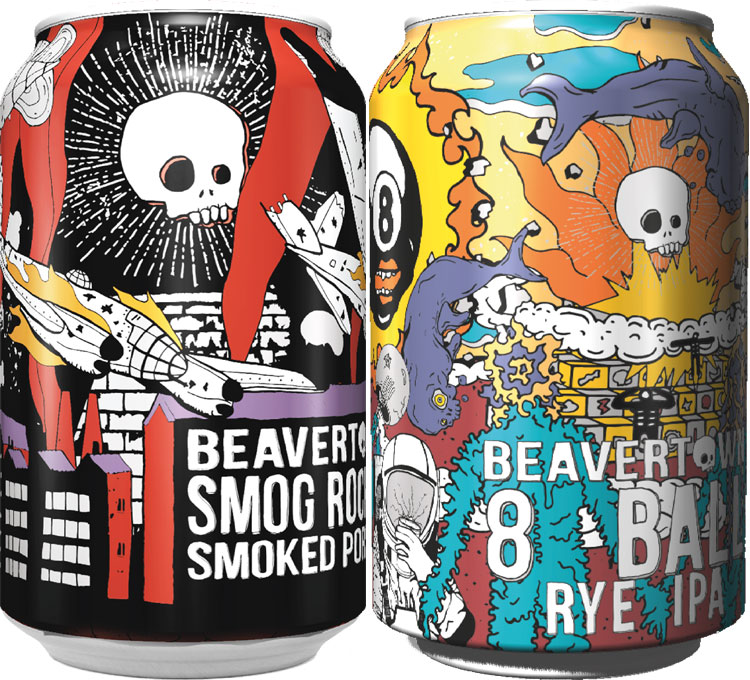 “People would tell their friends about the cool spaceman beer”

This sharp focus on design is a core part of the Beavertown ethos, Dwyer says.

“If you pick something up and it’s really bright and lovely, but it tastes like shit, you’ll remember that and we think it works the other way too,” he says.

As well as acting as a mark of quality, the bright and bold designs of Beavertown’s early offering doubled up as an effective marketing strategy for the fledgling brand, Dwyer says.

“Either people saw it and recognised it, or they wondered what it was and picked it up,” he says. “People would tell their friends about the cool spaceman beer they’d tried.”

Nowadays the brand has the budget for a marketing team, but the signatures of the brand remain. Indeed many of these signatures were born out of limitations, Dwyer says. The finite colour palettes and line thicknesses available for beer can labels have become part of his style, he says and thus in turn hallmarks of the brand.

“There was a time when you could go into a beer shop and it be quite bland. Now it’s much more colourful, and I’d like to think we put something towards that.” 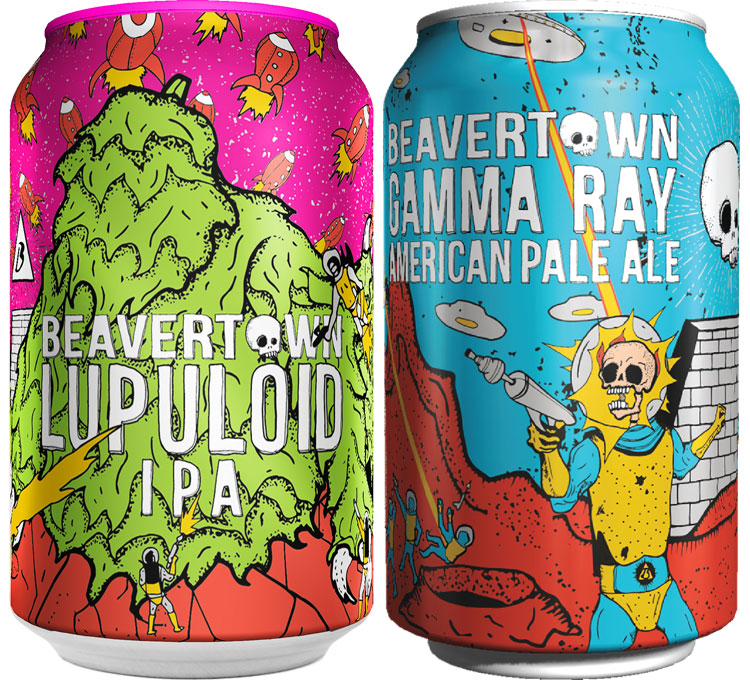 Pantone reveals two choices for its Colour of the Year 2021