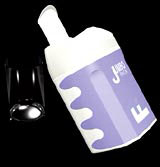 The Helen Hamlyn Research Centre at the Royal College of Art, in partnership with the Design Business Association, put on the DBA Design Challenge 2000 – Care for our future selves.The public forum was held at the RCA. It explored the role design can play in improving the quality of life for disabled people and responded to the failure of many products used to improve their lives. Four DBA member businesses were invited to develop innovative design solutions focused on the aspirations of younger disabled users, identified as the group most overlooked by product and service categories.

London design group Factory Design has designed a one pint cardboard carton that is easier to open than the standard Tetrapak one pinter. It is aimed at people who have dexterity difficulties, such as those with arthritis.

Factory creative director Adam White says the consultancy chose to refine the design of a milk carton because it has such an impact on so many daily routines.

The side of the carton has been given a rubberised grip to discourage the over-gripping that causes liquid to spill out of the top. The consultancy has also designed a seal with a large loop grip attached, making it easier to remove.

Once opened, a spout at the top of the carton is released for use by swiping across it. This adds two inches to the height of the carton, helping to prevent spillage and giving more control to the pouring action. The spout can then be snapped back into position.

“The thing about the modern pint pack design is that it has been geared to be produced in high volumes – this has worked against it,” explains White.

Design consultancy Priestman Goode focused on the theme of communication, working with a visually impaired user group to create Sensory Web, a computer interface to aid Internet browsing and deliver 3D output. The system works by downloading a 3D information file from the Internet into a 3D printer, containing 3D cartridges of, for example, cereal ingredients. The object is then created in a series of layers into a final structure.

“We have taken a technology that is used in manufacturing and applied it for domestic use. It gives a new dimension to accessing information and makes the Internet more useful and fun for the visually impaired,” says consultancy partner Paul Priestman.

“On the most basic level you could download Braille, or print out 3D maps. It’s a versatile system and reaffirms the independence that a visually impaired person feels when using the Internet,” he adds.

“We needed to produce a design that appeals to a younger market, but something that also provides the functionality required by disabled users,” explains Design House new media projects director James Hudson.

“The Internet doesn’t discriminate between able-bodied and disabled people and this idea of inclusive design is very appealing,” he adds.

The visually impaired particularly benefit from the design. Features include on-screen options to change the size of fonts and the colour palette, and screen-reading codes that allow words to be read out and images described aloud.

Leicester product design and development consultancy The Renfrew Group has designed a personalised control for a car that can be programmed to meet the demands of the user.

The normal steering wheel of a car has been replaced with two pressure-sensitive and speed-related handles, one for each hand. The modified steering “wheel” contains an airbag, and there are levers for braking. Handles can be used like a throttle for speed control.

Visually, the display console is more accessible and can be programmed to make it easier to read for visually impaired people. Features include display views of the proximity of other cars. The driver has a smart card that can be programmed according to his or her preferences.

“We are trying to get a more relaxed style of driving that will benefit a whole range of people. We have taken controls away from the floor, provided cruise control, with an improved display unit,” explains Renfrew design David Fawkes.

For those drivers without hands, but with fully working legs, a series of accessories have been designed to be fitted to the floor.

A 7-year-old brings in new business

84-year-old has to use HGV to shed his load