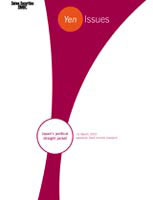 Daiwa is one of Japan’s largest securities houses. Its research division issues daily, weekly, monthly and quarterly publications to its clients covering a variety of financial and market topics.

Litmus was briefed to come up with a design template for the entire suite of literature to enable Daiwa’s internal design team to write and create the documents in-house. It has created a consistent look and feel for the portfolio of documents.

The design work incorporates a colour-coded approach using bold, graphic shapes, says a Litmus spokeswoman. The publications focus on different financial areas and currencies, including the yen, the euro and bond strategy among others.

The design work had to be flexible to incorporate documents varying in length and complexity, as well as allow for Japanese translations of each document, according to the spokeswoman.

‘A balance had to be struck between both European and Japanese audiences,’ she adds. ‘The cultures have different attitudes towards the presentation of information such as this and we had to appeal to both.’

Litmus was approached by Daiwa and presented written proposals, without creative work, to the client. It was appointed in September 2001. Phase one of the project is scheduled to launch in the middle of February and has been undertaken for a five-figure sum.

Phase two of the publications project is to redesign stationery to work alongside the revamped documents ‘in the next few months’ says the spokeswoman.

The consultancy is in negotiations to undertake a separate project unrelated to the publications work, she adds.